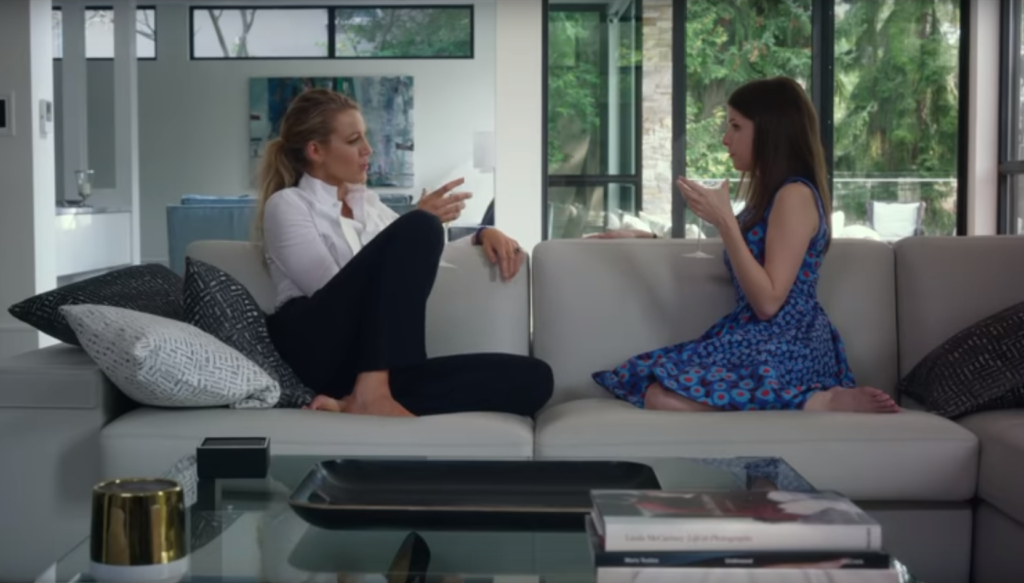 A Simple Favor is asking you to watch this film, leave your brain behind and enjoy two hours of a pastiche of seen it, shot it better films like: Gone Girl, Girl on The Train, Tell No one etc. Yeah, it doesn’t sound so simple now does it?

Blake Lively (Emily Nelson) and Anna Kendrick (Stephanie Smothers) are the leads in a film about a seemingly edgy Mum who loves to drink martinis in the afternoon – a sort of after school special versus the other Mum who’s the perfect mother, volunteers for all the school projects, bakes and has her own very vlog (video log for the non cool kids!). As we all know, there’s no such thing as perfect is there. The film starts five days after Emily goes missing. Have you seen Emily and then guess what the film is about? Do you want a clue? No I’m going to leave you hanging.

Is it diverse and/or representative?

A Simple Favor scores on the representation front – interracial couples are still sadly rare  in mainstream studio films and so it gets one gold star for casting Henry Golding as Sean Townsend-Nelson, Blake Lively’s on screen husband.

The film is enjoyable if it is not taken too seriously. The film tries to play around with the rules of the post modern film noir genre and is a bit hit and miss. A Simple Favor is directed by the man, Paul Feig, who directed Bridesmaids which itself was a game changer but this film isn’t. You can’t escape feeling that this film wants to be taken as a serious thriller which it simply isn’t. The clues are like neon flashing arrows in every scene: oh my goodness Emily has a dark side. Wait, what Emily’s real name isn’t Emily. Then the mother of all twists – Emily’s dead or is she, wait have I said too much. You get the idea. I have saved one or two plot twists especially for you if you decide to sit through this two hour carnival of cliches. It is funny in parts and I giggled but after a while of seeing the wholes or should I say tattooed signs in the script, ha ha funny me, I just wanted my time back. Out of the two actresses and, yes isn’t it so dull to compare, Blake Lively is the edgier of the two but Anna Kendrick nails the suburbia school mum as if she’s lived it. However, it is hard to care about either character or what may or may not happen to them.

A Simple Favor has big aspirations that it never quite meets.  In one scene, Stephanie insults Emily’s boss by calling him “a bargain basement Tom Ford” and ironically this is what A Simple Favor film is like – a bargain basement  Gone Girl for the teenage/twenty something market.  Silly me I also forgot to talk about THE scene, a little nod to Mulholland Drive – the two leading ladies kiss – oh my goodness – EDGY!

Save your popcorn money unless you’re in need of a giggle and into a whole new genre of thriller comedy.

A Simple Favor is released in cinemas across the UK on Friday 20 September.