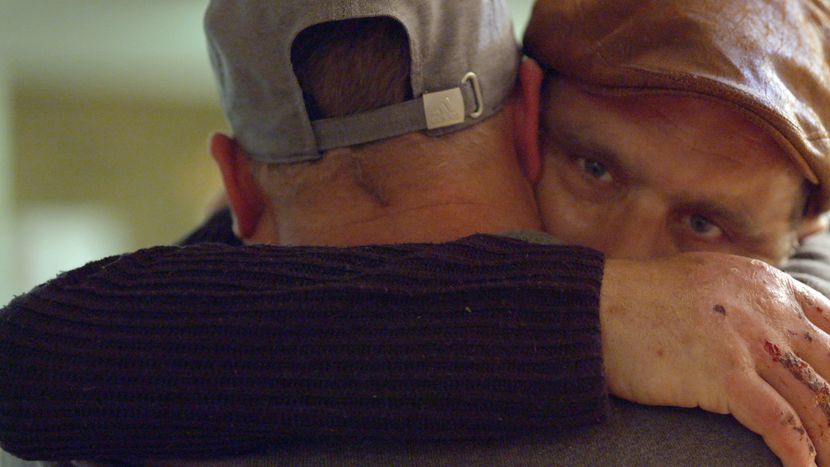 The only sure things in this life are: birth, death and taxes. Two out of the three have been the subject of numerous documentaries but never really death. In Island, Steve Eastwood, tackles what is still the ultimate frontier – death. Eastwood  seeks to demystify death and in some respects he succeeds and possibly the fear of actually dying is conquered but what lies beyond still remains a mystery.  Island follows four terminally ill individuals; Jamie (the youngest of the group at only 40, married with one daughter), Mary Chessel, Alan Hardy, Roy Howard and the wonderful staff at Earl Mountbatten hospice on the Isle of Wight all at different stages as they prepare to die: the struggle with accepting it and saying goodbye to family and friends. This all sounds rather bleak but the incredible soundscape and editing actually turns it into a rather life affirming film.

The opening sequence of the Steve Eastwood’s documentary film sets the tone: peaceful and provocative. There is no sound just the fog lifting to give the viewer of a dead body in a coffin. Actually throughout the entire film the only noises to punctuate it are those of nature or people speaking. This makes the film feel serene. It’s the silence that fills the gap and only the noise of nature and those that are dying that punctuate it. Oh and the wonderful moment, the young daughter of Jamie, singing it Let It Go from Frozen to her father.

Of course it is diverse and possibly a cinematic first to see someone die on screen. This is probably the most challenging documentary you will see in 2018 and yet it is vital. If we can become more open about death then we may not fear it as much and conversely live fuller ones as a result. The opening scene is that of Alan in his coffin – it is quite a starling and bold opening scene.

It is a rare privilege to watch someone die. Yes, I did say privilege. The fact that someone is courageous enough to allow others to watch what for most is a very intimate moment – the act of leaving this world. This as with watching a woman give birth is also very intimate and private event even if there are usually a number of people in the room with the latter.  What I will say is it is over rather quickly, an almost blink and you miss Alan take his final breath, and then the nurse utters the fateful words that he’s gone now. The actual moment went so by so quickly I thought oh that doesn’t seem so bad and now I know what to expect, I am ready. None of this feels flippant and it is a moment that haunted me for a good few weeks afterwards. An unexpected legacy of sharing such an intimate moment with another human.

The documentary works because it is done sensitively. That said it is hard to watch four people die but it never feels voyeuristic or  invasive.

Does the documentary achieve its aim of demystifying death? The process yes but it depends what as a viewer you fear more – the process or what, if anything, is waiting for us on the other side and that is not something a filmmaker can ever truly show.

ISLAND is out now with special filmmaker Q&A screenings from 8 September www.islandfilm.co.uk