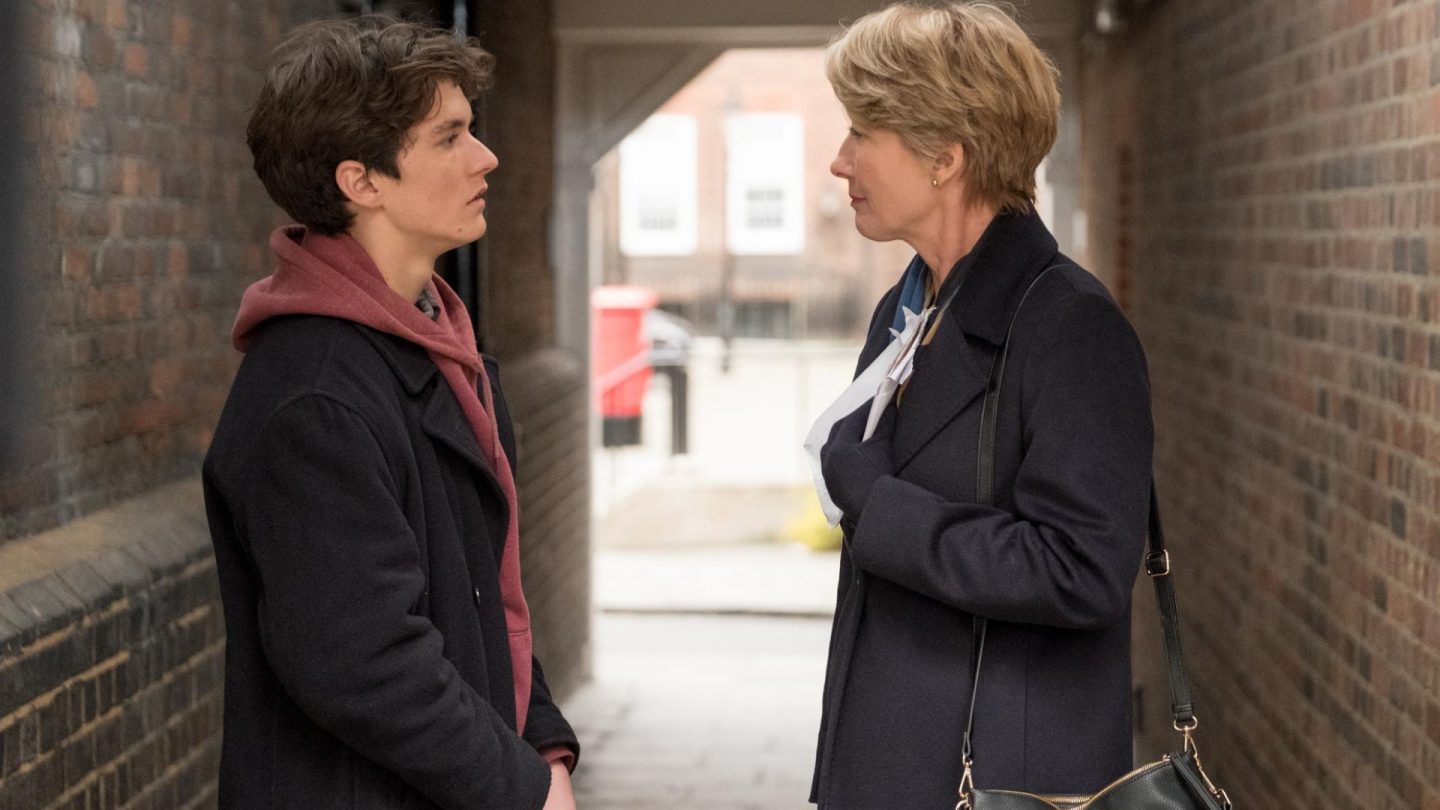 The Children’s Act is a slow and somewhat passive look at the breakdown of a marriage told from the point of view, I use that term loosely,  of a female judge who must decide which is more important: the case before her or the state of her marriage. The solitary act that could have saved this film from itself would have been to have chosen a screenwriter to write the script rather than allow the author, Ian McEwan, to adapt it for the screen.

Fiona Maye (consistently good Emma Thompson) is a judge in the Family Division of the High Court in London whose daily work life consists of passing judgment to protect the most vulnerable members of society. At home she is married to Jack (Stanley Tucci), a lecturer. They are childless and appear to enjoy drinking lots of whisky and she loves to play the piano and sing. This charmed existence is not enough for Jack who, within the first few scenes, announces he intends to have an affair. She is shocked. He believes his action is a noble and adult one since he still loves her but they have not been intimate for some time – think months if not years. Before Fiona Maye has time to think about her marriage, the next case before her is that of a Jehovah Witness couple who are refusing to allow a blood transfusion for the 17 year old son, Adam Henry (Fionn Whitehead), who is gravely ill with leukaemia.

In a few respects, it actually is. The fact that the roles are reversed and it is the woman who is much more financially successful than her husband. This is not a role we see often on screen. Also, touched on far too briefly is the fact that they a childless couple and have been married a long time. This is probably the most interesting aspect of the film but it isn’t really ever expanded upon which is a pity.

The core success of any film is to feel something, anything, for the characters on screen. There has to be a connection. Emma Thompson acted incredibly well but her character was so cold that even when some emotion was shown it just felt slightly odd and misplaced. Stanley Tucci’s role as the husband was resolutely one dimensional and didn’t appear fully developed.

The real issue is that Ian McEwan adapted his own book for the screen and remained faithful to it. He did the same with Chesil Beach. The first of his books to be brought to screen, Atonement, was adapted by someone else who managed to capture the beauty of the prose and keep the action moving along.  McEwan’s prose is beautiful on the page but it can’t be literally transposed to the screen and this is where this film falters.  On screen there must be action otherwise it all starts to feel passive and attention spans start to wane.  Admittedly, some will argue that the case concerning the Jehovah Witness couple is the action but even that felt a bit predictable. At one point, Fiona Maye asks one barrister: “Why am I here?” and at various points during the film not only do you ask this but also; how did we get here?! The classical soundtrack felt intrusive. The mirroring of the weather to the character’s emotion eg rain when someone is miserable or to demonstrate a dramatic moment was tiresome. On a positive note, it is an intelligent script and so doesn’t just feed information which is important and should be applauded. We need more films that acknowledge an audience’s intelligence. Also, it is under two hours in length which will always get a big gold star from me!

I want to see more films about childfree/childless marriages, women in powerful positions and how that affects marriages but the Children Act didn’t spend enough time on these issues.

The Children Act is released in cinemas across the UK on Friday 24 August.