I love my bed. Truly, it is really comfortable and so when I travel I want that or better. However, that’s five star territory and mostly I’ve got one star money and want to get away – enter the day trip. I know it sounds so rock and roll and, actually, it is, especially when done solo. You’ll be asked but why and the answer is “because I can”! If you’ve never travelled solo – this is a perfect taster one day, not even 24 hours but 16 hours from leaving your house to returning home the same day.

Also, I am so bad at organising things so my bank holiday weekend plans were ruined but Madrid saved the day on Bank Holiday Sunday!

That’s it, anything else is a bonus.

My return flight to Madrid cost £71 with British Airways. Google or Sky scanner is key here, actually, google is better – just put in your departure town (mine is London) and leave the destination blank and hey presto. Then click on the price, it is better to do it this way than to go to the airline as these cheap tickets are usually hidden.

Just so we are all clear – day trip means an entire day! Here’s the how, what, when:

My Madrid Must Sees: Temple of the Dead, Guernica by Picasso

My Madrid Observations: Google map doesn’t work well there – it doesn’t know its left from its right, the sun us hot so even for an extreme walker like me (Madrid is a very walkable city but not in August) I did take the tube more times than I would normally just because it was so hot. Food is cheap and shops are open on a Sunday.

4am – A taxi to Brixton station and the night tube to Heathrow. It’s a whole new world – the party line and watching the shadow of monster hangovers cross over people’s faces.

5.45am – Just me and my sexy clutch as I glide through Heathrow, a little coffee and then board the flight.

7 am – There’s a quiet satisfaction watching others try to ram their overhead luggage into the overhead bins as you glide gracefully into your seat with your clutch bag. Yes, smug day tripper here! 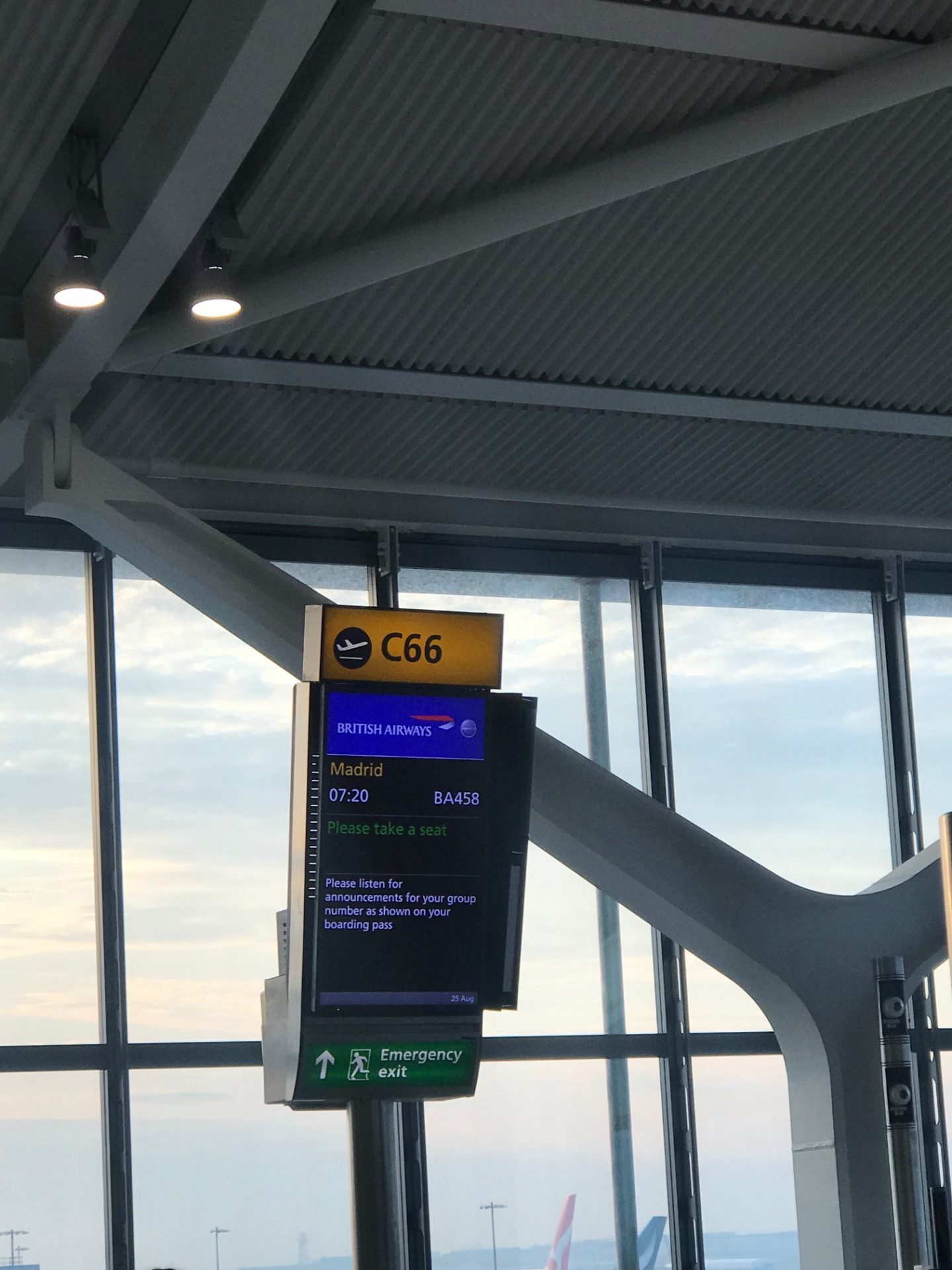 10.20 am – arrive in Madrid. I think this may be the happiest border control I have ever witnessed once I found it. Now, I do believe signs are truly for decoration in Spain and they have such pretty signs when you get off the plane follow the signs for luggage which is mixed in with flight connections. Don’t worry – just turn right and you’ll find someone saying passport. The EU border control is automated – you know the machines where you shove your passport. The staff guiding you in are smiling, warm and just happy humans. I thought this is fun! Vamos, vamos she said and I wanted to say I’m coming – instead, I smiled, walked into the lane and shoved my passport down.

10.30am – there is a tourist info point before you come out in the waiting crowds. Go there and ask for maps – they are lovely and speak English. The lady explained to me what type of metro card I needed and the nearest metro station. There is a metro at the airport that will take you straight into downtown Madrid – just take the escalator two floors down.

10.40am – I bought a tourist card, that’s what it is called for €8,40 and gives unlimited travel on the metro, trains and bus BUT not the airport bus. Also, there’s only one metro line from the airport to Madrid line 8, you have to change at the terminus to the blue line (for me as I was going to temple of the dead). It is super simple – just make sure you look at the direction of travel for the end of the line to make sure you are going in the right direction! The metro feels slower than the London tube – allow 30-40 mins to get from the airport to Nuevos Ministerios. 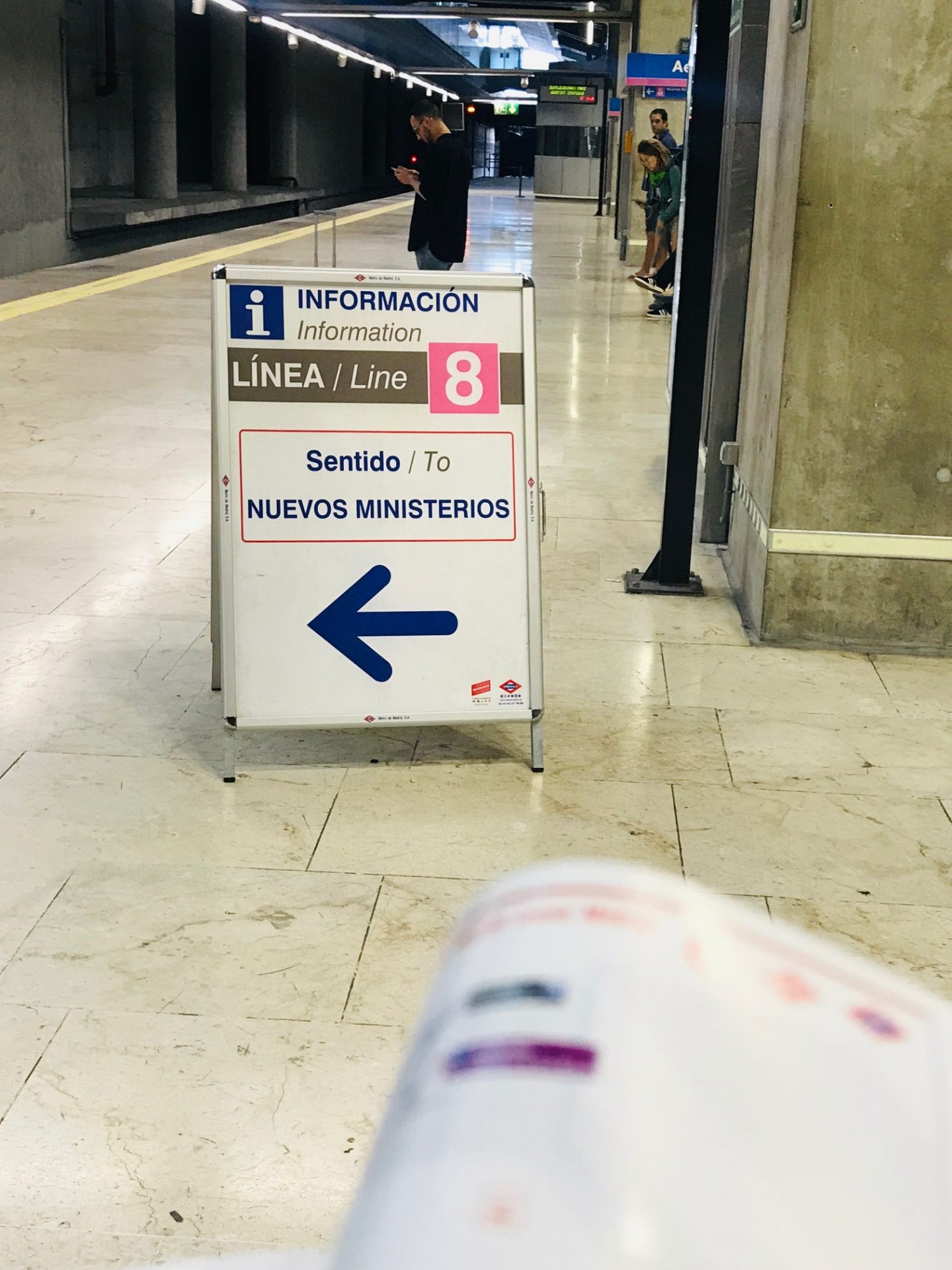 FIRST MUST SEE – TEMPLE OF THE DEAD

*REMINDER: You need to go old school in Madrid – paper maps are your friend.*

11.40 am The tube stop for this is Plaza de Espana.  The Temple was a gift from the Egyptian government to the Spanish for their help during the construction of the Suez canal if wiki is to be believed. I love a bargain – two countries for the price of one. This temple is 2,000 years old and you can go inside – I didn’t and you’ll find out why.

The Temple is at the very top of a park and apparently, the best shots are at dusk. I wouldn’t be hanging around this park late in the evening to try and get a photo. After I climbed the stairs and found it like a hidden oasis – no water though – disappointed! I was tempted to walk on those cobbles you see. Beep beep went the policeman’s whistle (not at me) but at some other person who had the same thought as me. You must walk around. Nice, nice I thought and then I marched straight up to the entrance, it’s free to go inside, only for the Spanish guard to start saying something to me in Spanish and then wildly pointing. Under a midday sun – the long queue sits in the shade. I counted 50 people and I still needed to have lunch and see Guernica. I’ll go next time I am in Madrid – Hasta Luego Templo de Debod! 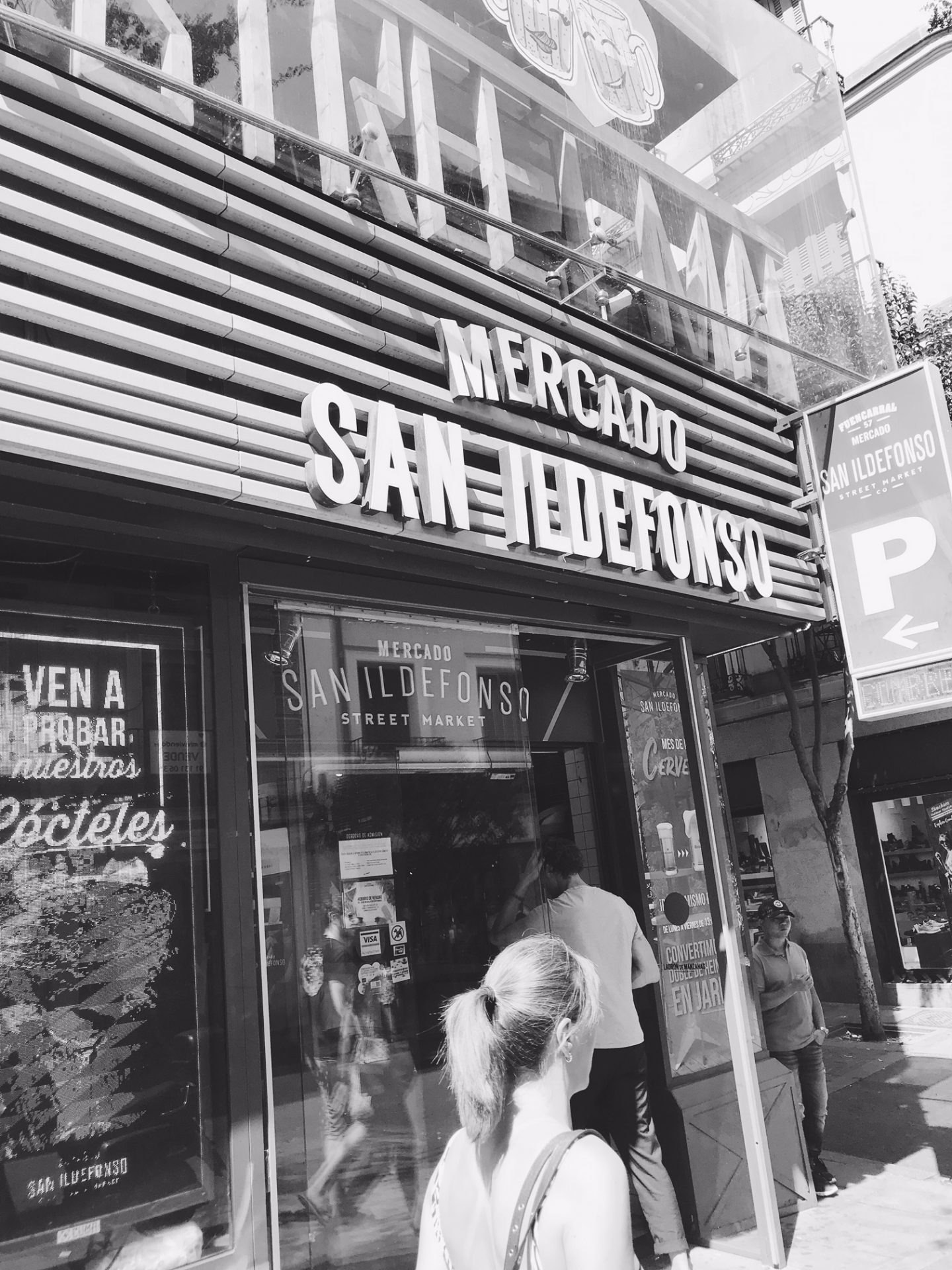 12.50 PM – As you all know I am ruled by my stomach. I was on the hunt for tapas, jamon, just good food and there must be places in the height of summer and open on a Sunday in Madrid. Now my wonderful friend, who’s a local, told me mercatos or markets are all the rage currently in Madrid. I went to Mercato San Illdefonso which is one of the fewer tourist overrun ones. I was rewarded with no queues, truffle infused rice and a wonderfully cold cider, the latter was basically a health drink after walking in the steaming Spanish sun for an hour. 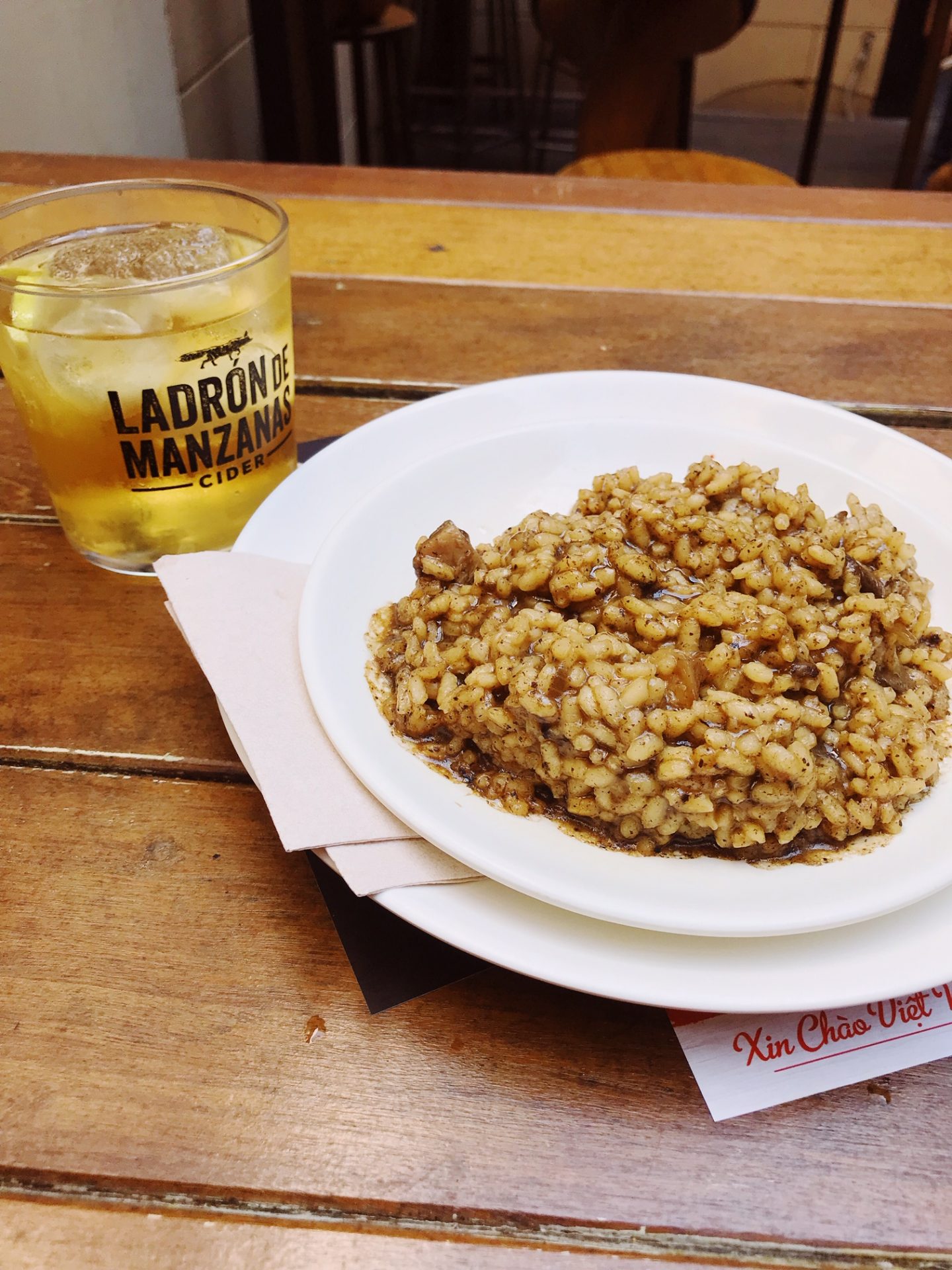 SECOND MUST SEE – GUERNICA BY PICASSO AT REINA SOFIA MUSEUM 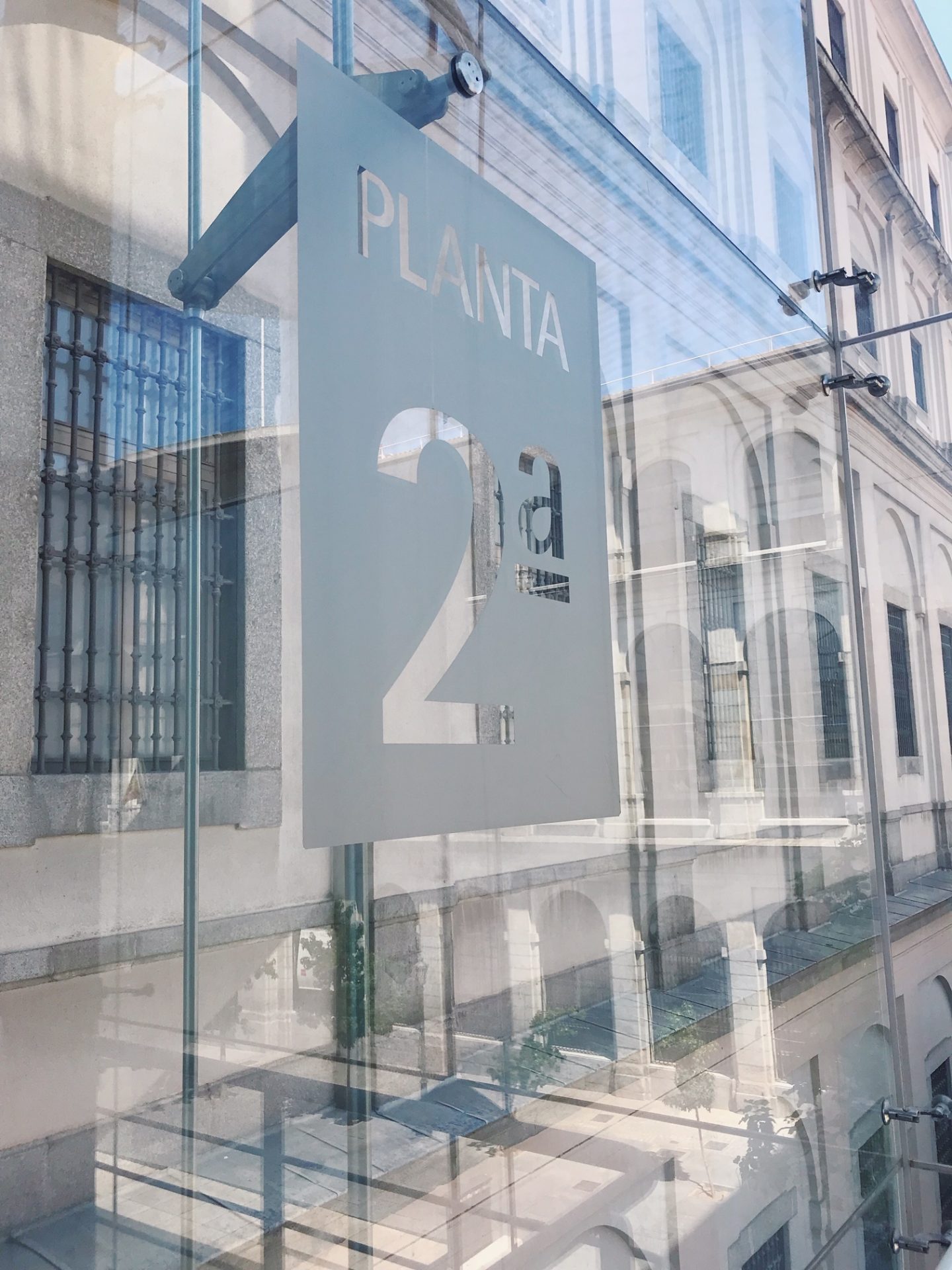 2.10 PM – Aha so museums are free on a Sunday after 1PM and what does free equal?

I arrived and saw the queue but I was determined I would be seeing Guernica today. I dutifully stood in line and it was hot however after 30 mins I was in. Now, the only downside to the freebie entry is that the museum shuts down a lot of the other rooms and exhibitions. Ordinarily, I’d be irritated but not today, this chica was just here to see Guernica and it didn’t disappoint. In much the same way that you do at the Louvre to see our girl, Mona Lisa, you do the same for Guernica. It is permanently located in room 206, take the lift up (those glass lifts are really such a great design feature – I went up them and down them a couple of times – yes, really!)

Anyway, back to Guernica – it is sobering and a must see. 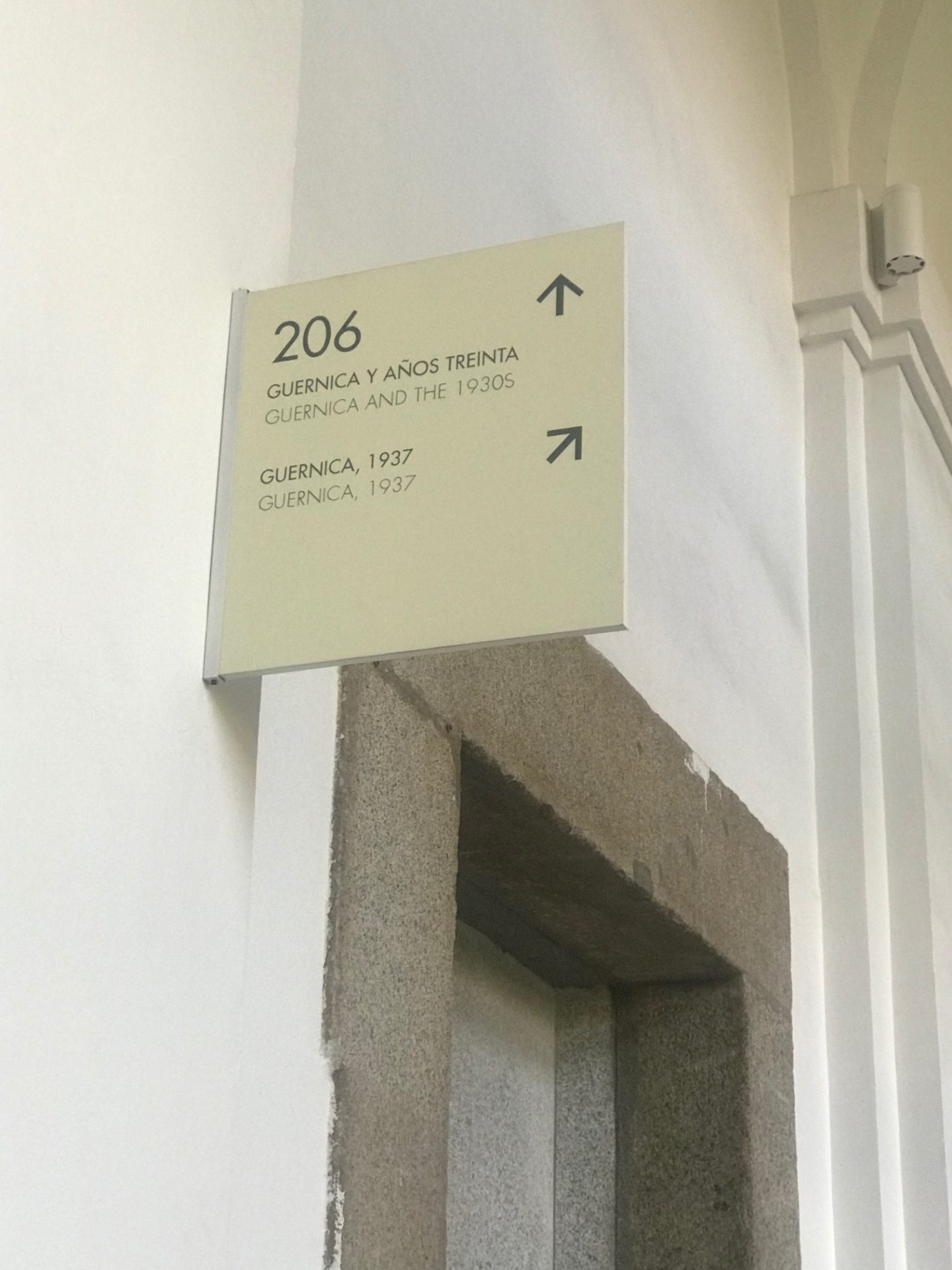 3.30-5PM I went shopping of course – a little glance in Zara and other places, bought some sandals and then I headed back to the airport.

6PM – Back at the airport and cleared security. Now after security in Terminal 4S there is a Zara so don’t fear if you don’t manage to find it on your day trip in downtown Madrid and the prices are good. 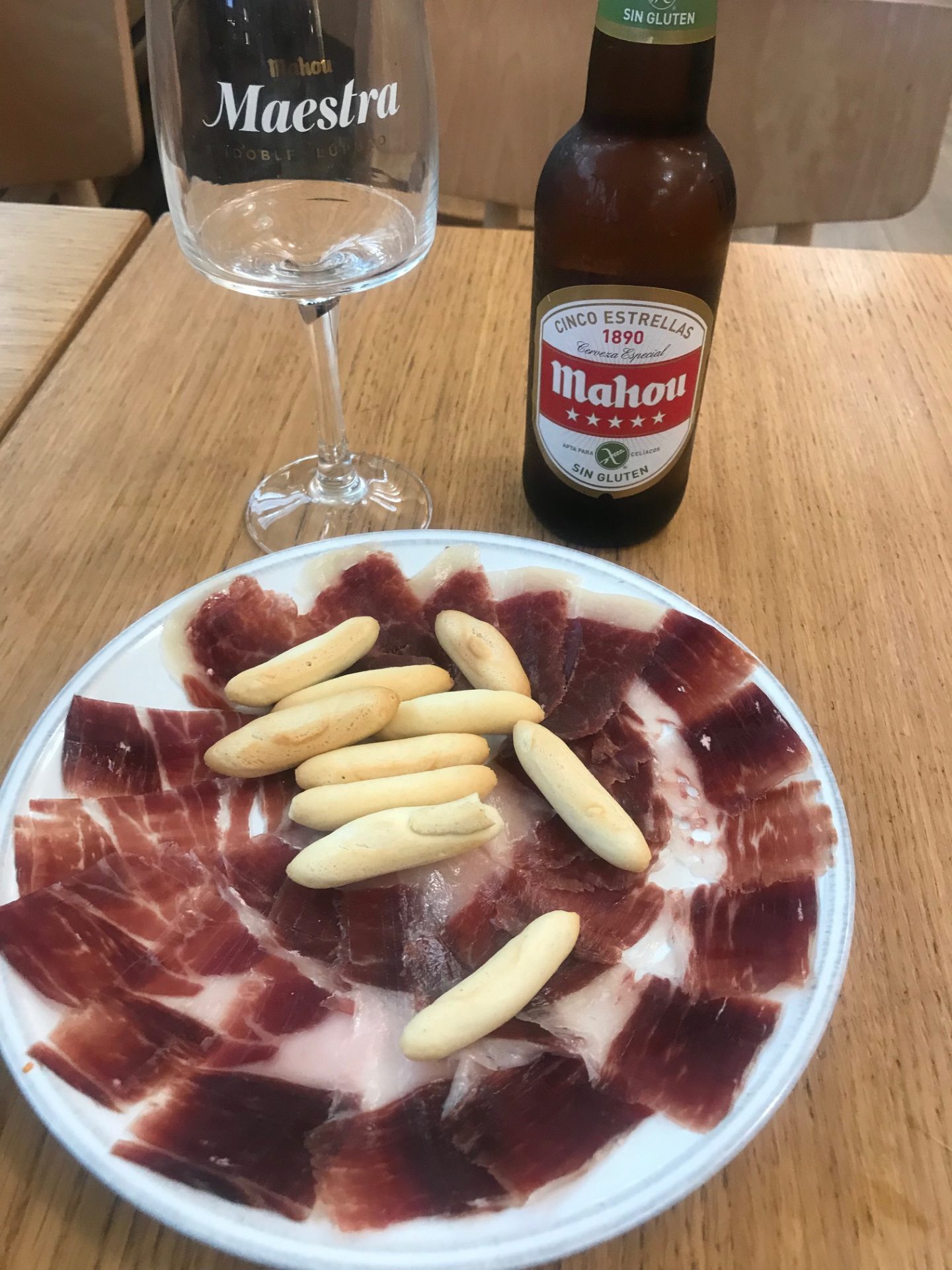 8.30PM department – flight delayed by 45 mins but who cares gave me a bit more time in Duty Free and for a sneak plate of jamon. It was also British Airways 100th birthday weekend…and look who was giving out free chocolate! 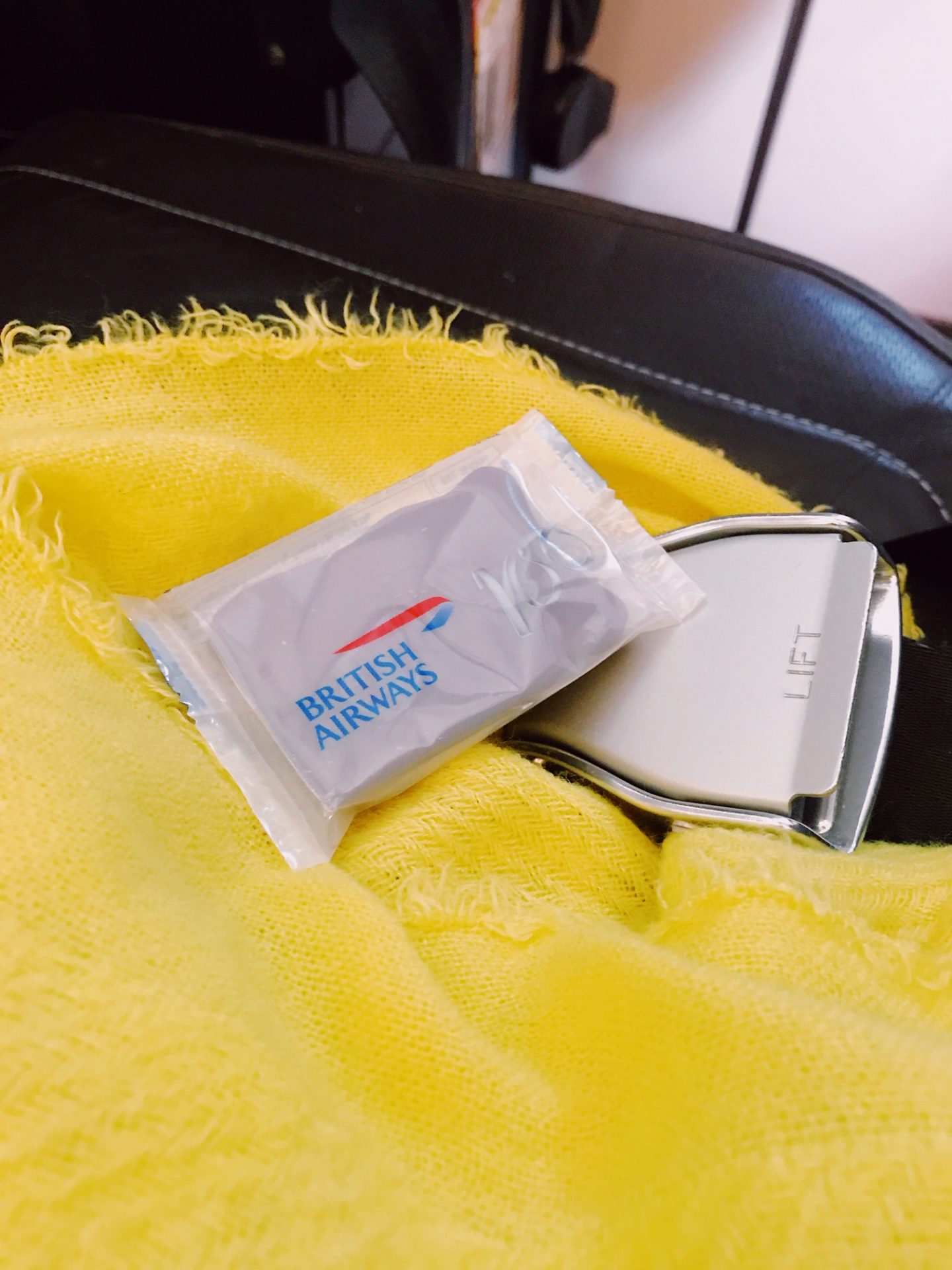 9.30PM or near enough land back in Heathrow.