In an attempt to atone for the gluttony during my 3 weeks in Georgia, I made a reservation at a raw food restaurant in Paris. I thought that this must be an oxymoron – does raw food exist in the land of heavy cream sauces, quiche lorraine, potato dauphinoise? Apparently it does – French style -more of that later. 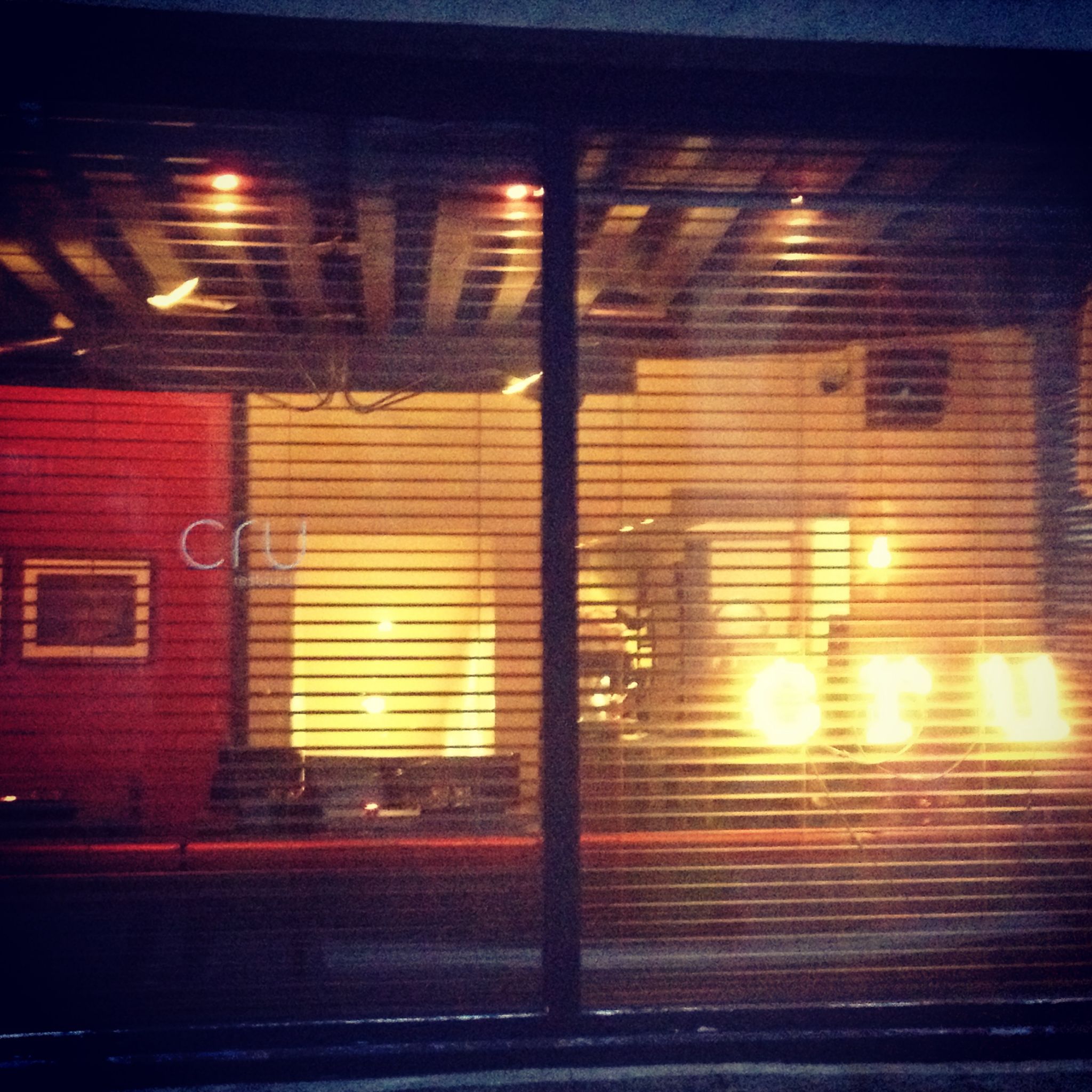 Look at the photo above. Imagine the scene, it is a chilly evening and I am going to be sitting eating essentially cold food, lets not make it sound more exciting than it is, and I arrive at the restaurant at 8pm to find it empty. Bloody hell I thought – raw food isn’t that popular in France!  One of my pet hates is eating in an empty restaurant.  I know, I know – I eat alone but I don’t want to be alone in the restaurant. Nothing to do but go on inside. I had made my reservation already so eating alone in an empty restaurant it was then. 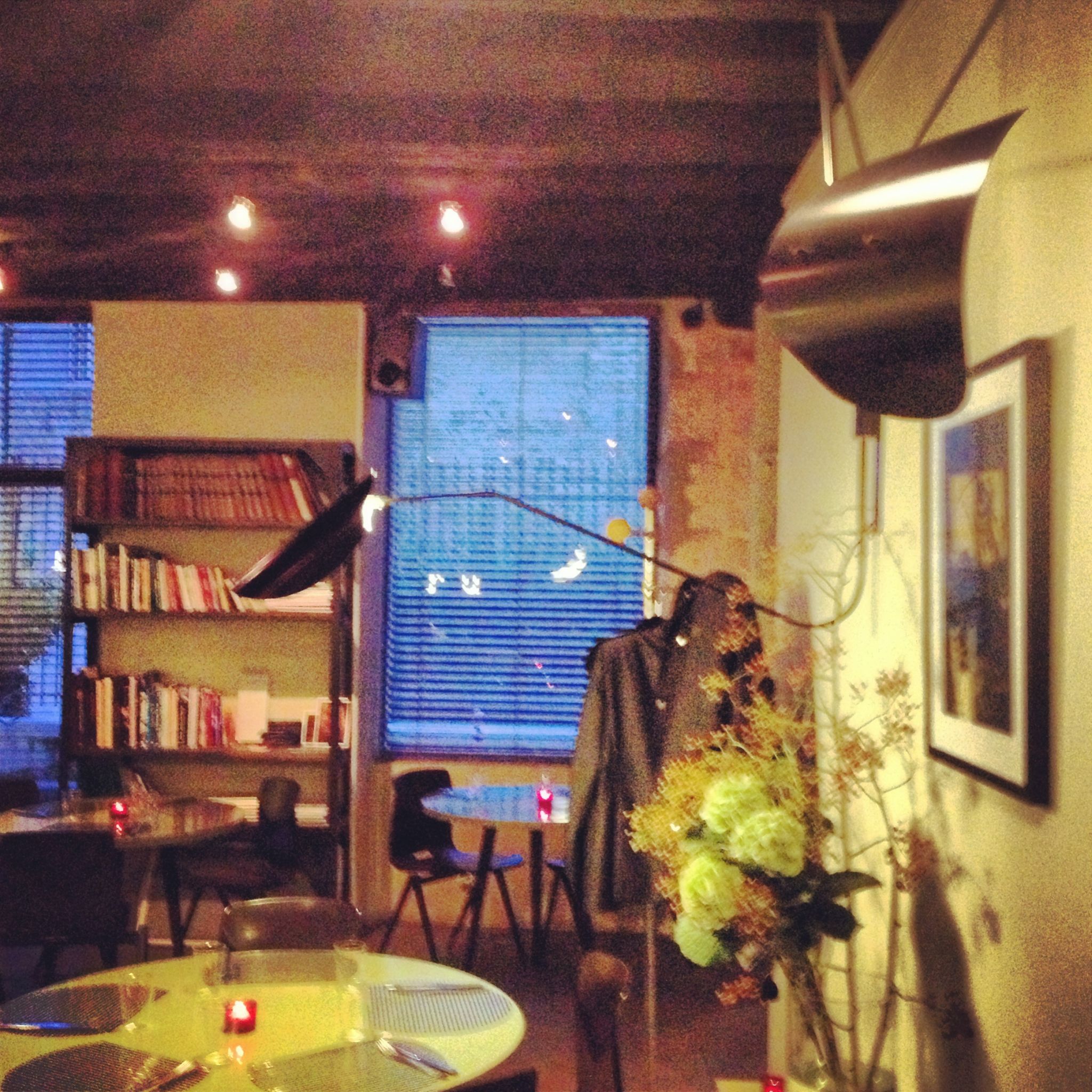 Never judge a book by its cover or in this case, the empty front room. The photo is the very front of the restaurant and the actual restaurant space is made up of two rooms.  I entered the restaurant pushing back the heavy velvet curtain to guard against the cold. There lay a modern, clean, minimalist space that made me feel as if I was walking into a friend’s apartment, albeit a very tidy friend’s apartment decorated using a palette of green and black.  The maitre d greeted me and when I said I had booked a table for one – didn’t bat an eyelid. I was given a great table that looked onto the rest of the restaurant.  There were two other couples also eating so not alone.

As I gazed down the menu thinking what couldI eat. I hate cold soup – gazepacho etc – and I mean hate. I spied pork spare rib. Pork spare rib – what you can eat that raw I thought? No wait hang on a minute the West Indian blood flowing through my veins thought never. For those of you who do not hot have West Indian heritage – let me enlighten you – meat is cooked until it is prehistoric in the West Indies. So raw pork spare rib – hmmm – well I never. That wasn’t the only surprise on the menu, there was spring risotto. My mind went into overdrive. Would the dish arrive with grains of arborrio rice and pieces of vegetables floating in a bowl of water?

With my active imagination in overdrive, the waitress came over and asked me what would I like. I had to ask before I made my decision about the pork chop and risotto. Well, she smiled and looked at me. No those two dishes are actually cooked. I audibly sighed relief so in actual fact raw did not actually mean raw in France. Also the soup is cooked to 115 F so it is tepid in heat anything higher than that and it is considered cooked. Everyday is a school day especially at Cru. With all this information at hand I decided to go sea bass carpaccio served with kiwi and combawa which was priced at a not to be sniffed at €24. Given I was eating raw and being virtuous I ordered a cup of green tea.  I needed at least one hot thing to go with my cold food. Although the wine is really reasonable priced but I have decided that I will not drink on a school night for the rest of the year… 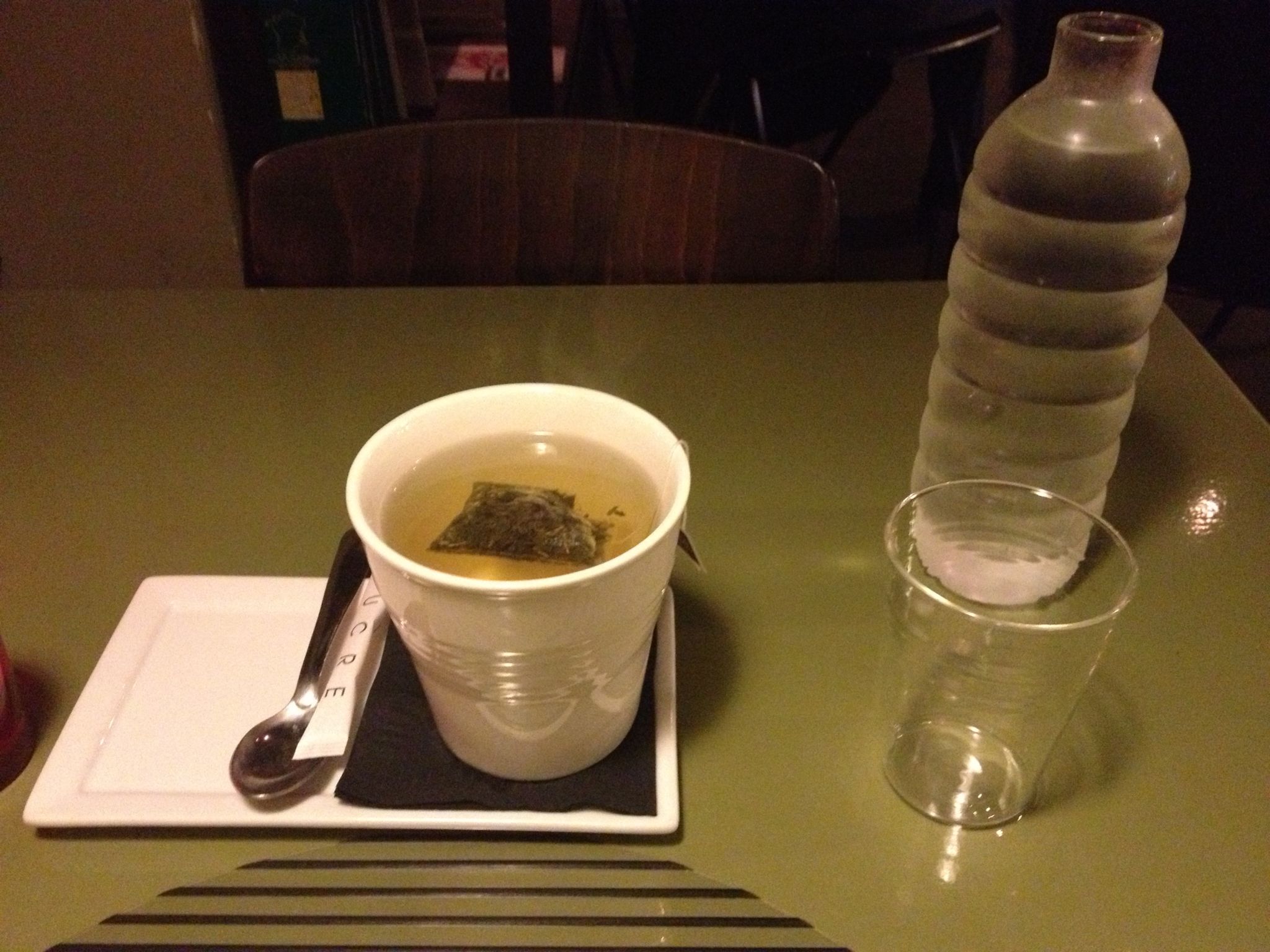 I sat and sipped my tea whilst waiting for my dish. Just because it is raw and cold doesn’t necessarily mean fast. As I waited the restaurant filled up until all the tables were taken.  I noticed how everything was chosen so that it was a playground for the senses: the wooden bowl for bread, the linen napkins, the rubberized place mat. The background music was definitely very  21st century but played at a pitch that it drowned out some of the next door conversation but not totally so that if you sparked up a conversation you didn’t have to shout. 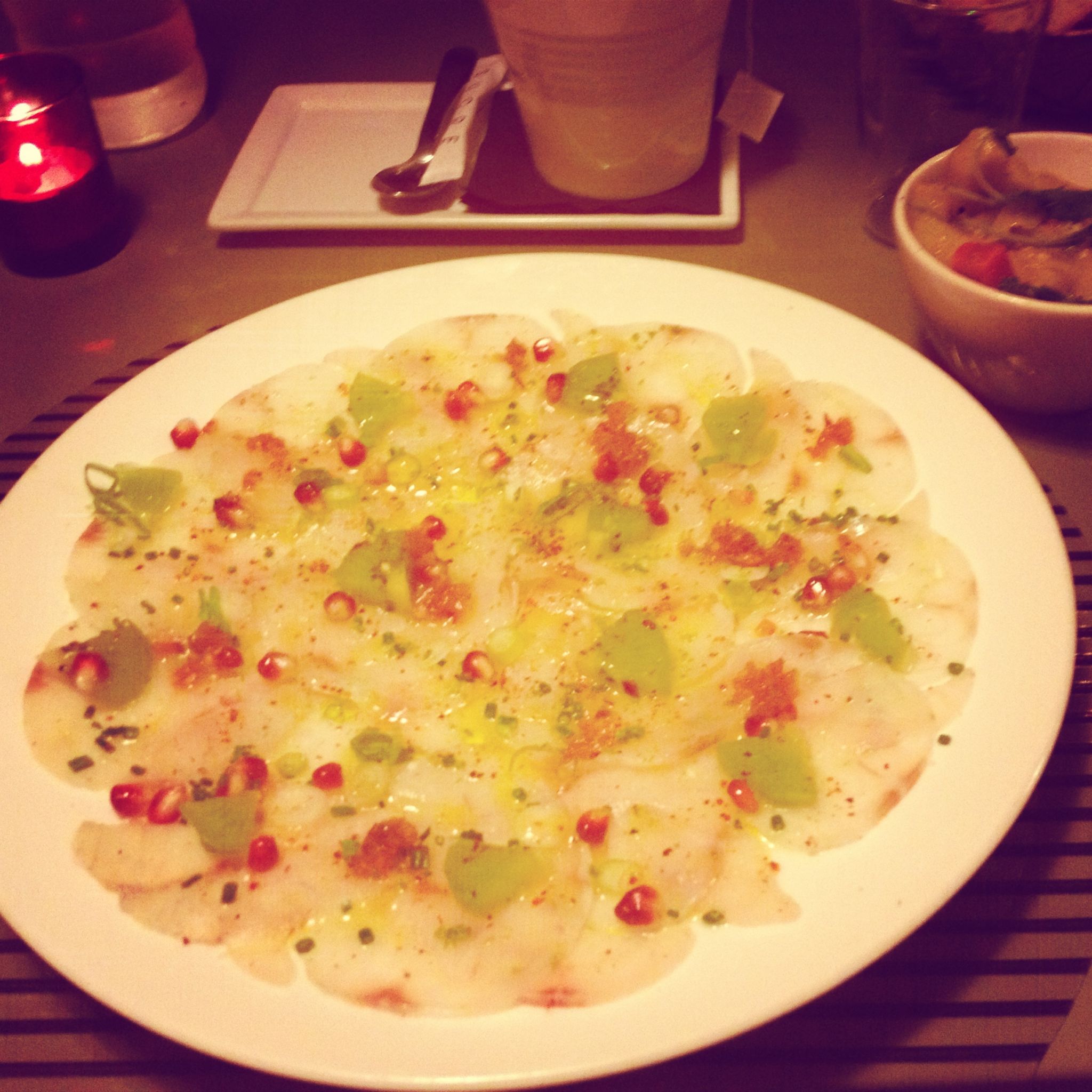 My carpaccio arrived and before I even noticed the plate, it was the smell that hit me.  The wonderful combawa which is a member of the citrus family filled my nostrils of  a promise of the light, refreshing dining pleasure that awaited me. After my eyes had finished drinking in the colour I dived in. Eating raw does has its advantages, I found I ate really slowly. Each mouthful counted. I am not sure if the restaurant was already warm, or the fact that my stomach was working that little bit extra to digest the food (ha!) but I took off a layer of clothing.  It was definitely hot in here!  The dish was served with a small bowl of curried raw vegetables which were equally delicious.

As is the way with most restaurants in Paris and here was no exception: the tables are very close together. I struck up a conversation with the ladies seated next to me.  Both of whom ordered the pumpkin soup and then we all ummed and ahhed about dessert.  Nothing leapt out at me but I wanted to sit and talk some more to the ladies next door so I ordered the peach tartare. The name was actually more interesting than the dessert itself. Which was bowl of chopped up peach with a miniscule dollop of peach sorbet. For €10 it was probably the most expensive peach I have ever eaten to date!

Aside from dessert, the service was exquisite. I felt very relaxed and had a very enjoyable evening. I am even tempted to head back to Cru either for Sunday Brunch or dinner and this time order wine and that cooked risotto!