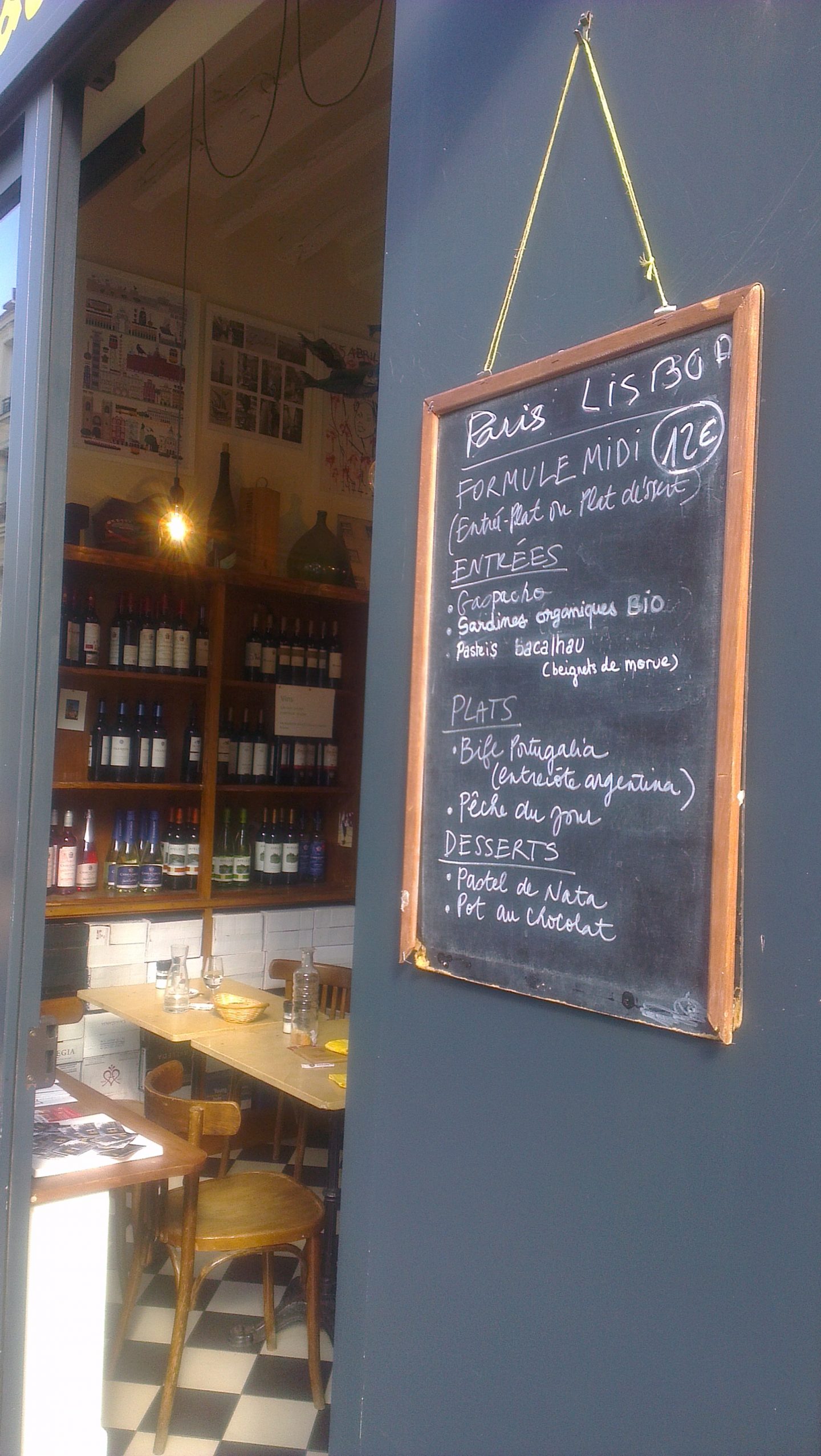 Paris is the city of love, light and walkers.

To really see Paris you need to walk the streets and get lost, as I do often, being GPS challenged even with a blue flashing dot on the map I manage to often go in the wrong direction. You could take the metro and have the metro ticket rejected because it got demagnetised in your bag next to phone or have the pleasure – did I say pleasure – of someone push up against your backside, with not so much as an introduction, as they barrier hop. Yes, a very Parisian sport is fare dodging and riding the metro for free.  Then if that wasn’t enough there is the dank stench of perspiration so strong that the back of your throat itches. The one possible highlight of the metro might be the musical entertainment – my personal favourites are: the clarinet player who is seriously good on the line 6, Michael Jackson on the RER A who only seems to know one line from ‘his’ song Billie Jean and the young couple who dance to ‘Forgot about Dre’ on line 12 and turn the carriage into a party carriage where everyone is smiling and laughing with them. So you see Paris is a city for walking to turn down side streets that offer up hidden gems as did rue Taillandiers in Bastille when I was looking for my next solo dining adventure. I saw Paris-Lisboa and thought maybe I had been transported to Lisbon – an open door, the smell of salt cod and a prix fixe menu at €12 for lunch. 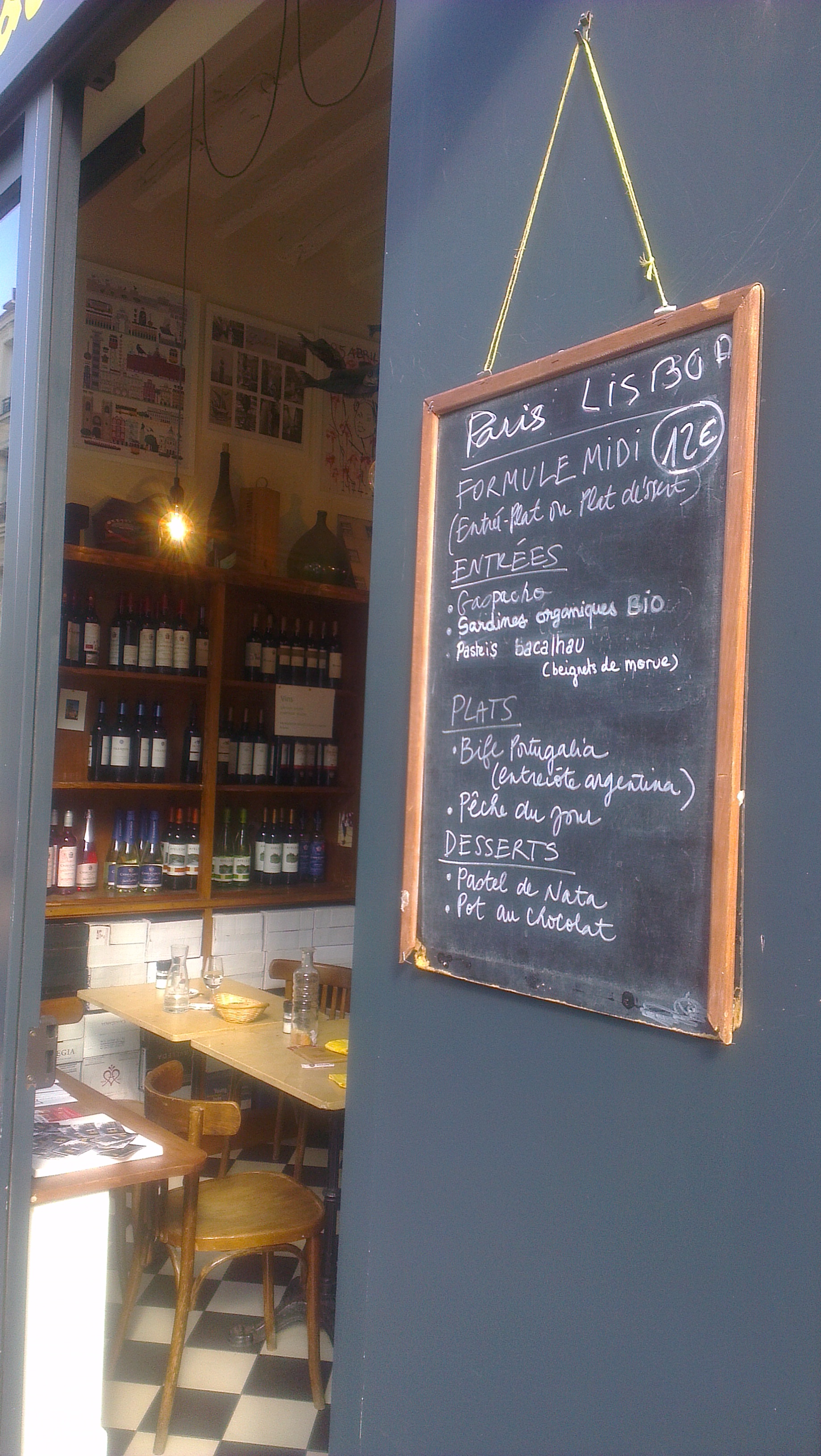 The restaurant is small with 4 tables set  downstairs looking onto the open plan kitchen and there are a few tables upstairs. The restaurant doubles as an épicerie so the wine can be bought and drunk with your meal or taken away. There are a couple of tables outside on the very narrow pavement and as I approached these were both taken by people soaking up the last of the last of the summer sunshine. I was greeted by the owner who unfazed  by my solo dining status offered me my pick of tables and I chose one downstairs close to the boxes upon boxes of Portuguese wine.

The atmosphere is relaxed and this restaurant is popular with the locals as it filled up very quickly. There was no pressure about me being a solo diner and I was left to make my choice from the lunch menu.  My policy is when in Portugal eat Portuguese and I can never eat too many bacalhau especially when done as fritters. The owner recommend the fish main course which was cod served with a coriander infused risotto.  Obviously I had to have a glass of white and he asked what my preference was: dry or medium, why complicate things eh, and then suggested something which I gladly agreed to.  I then sat back and relaxed flicking through the Lisbon tourist board brochure, admiring the paper mâché fish installation from the ceiling part of a collaboration with a local artist and of course listening to the couple of ladies sitting next to me gossiping.

The bacalhau arrived with just the right amount of salad leaves and nothing else – they were fried to perfection and yet managed to contain a still moist interior of potato and salted cod. It was as the French would say un régale, an absolute foodie delight. 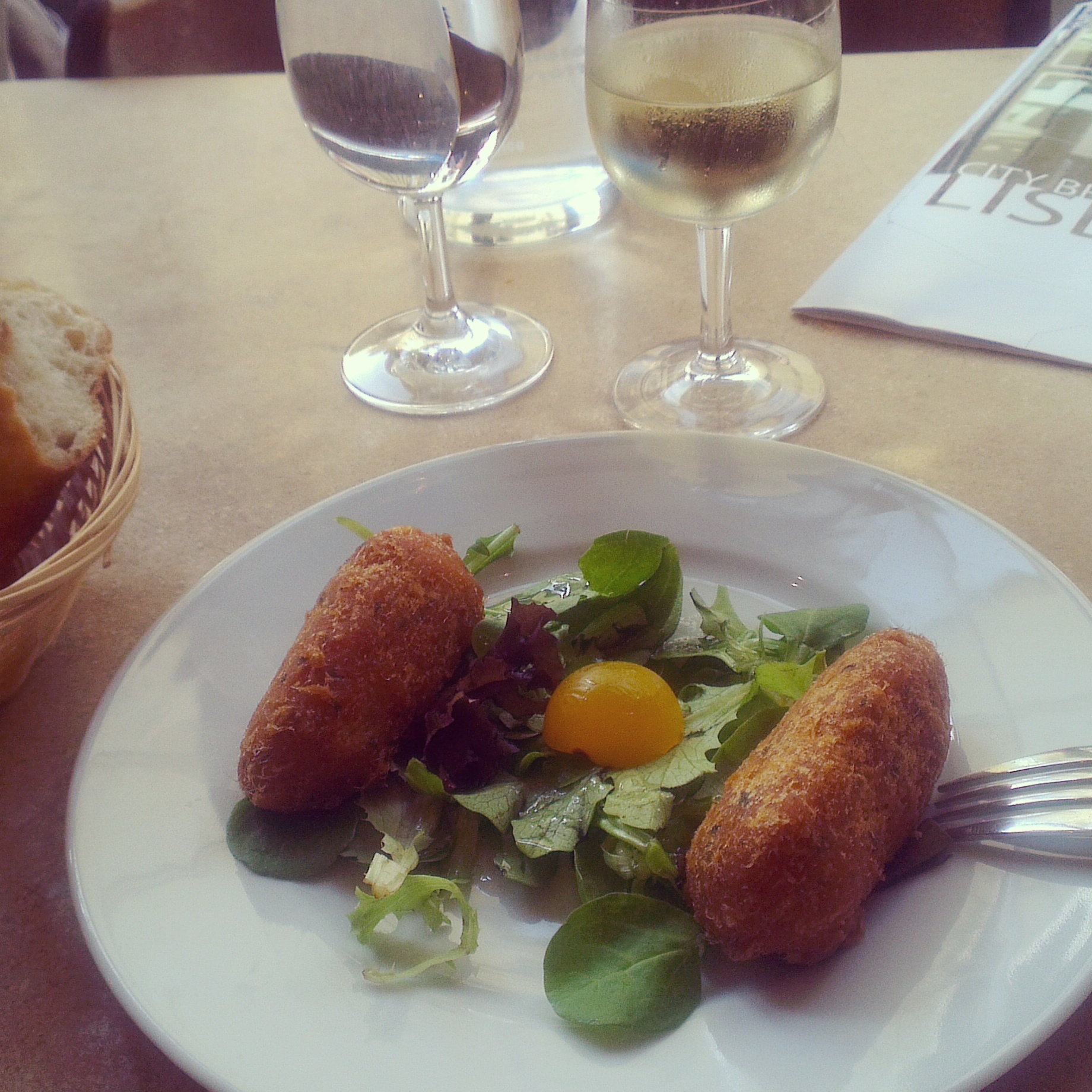 This was followed by the main course of cod with the coriander infused risotto and whilst the cod was perfectly seasoned the risotto was a tad dry for me although having said that the coriander did lift what could have been a rather bland main course. 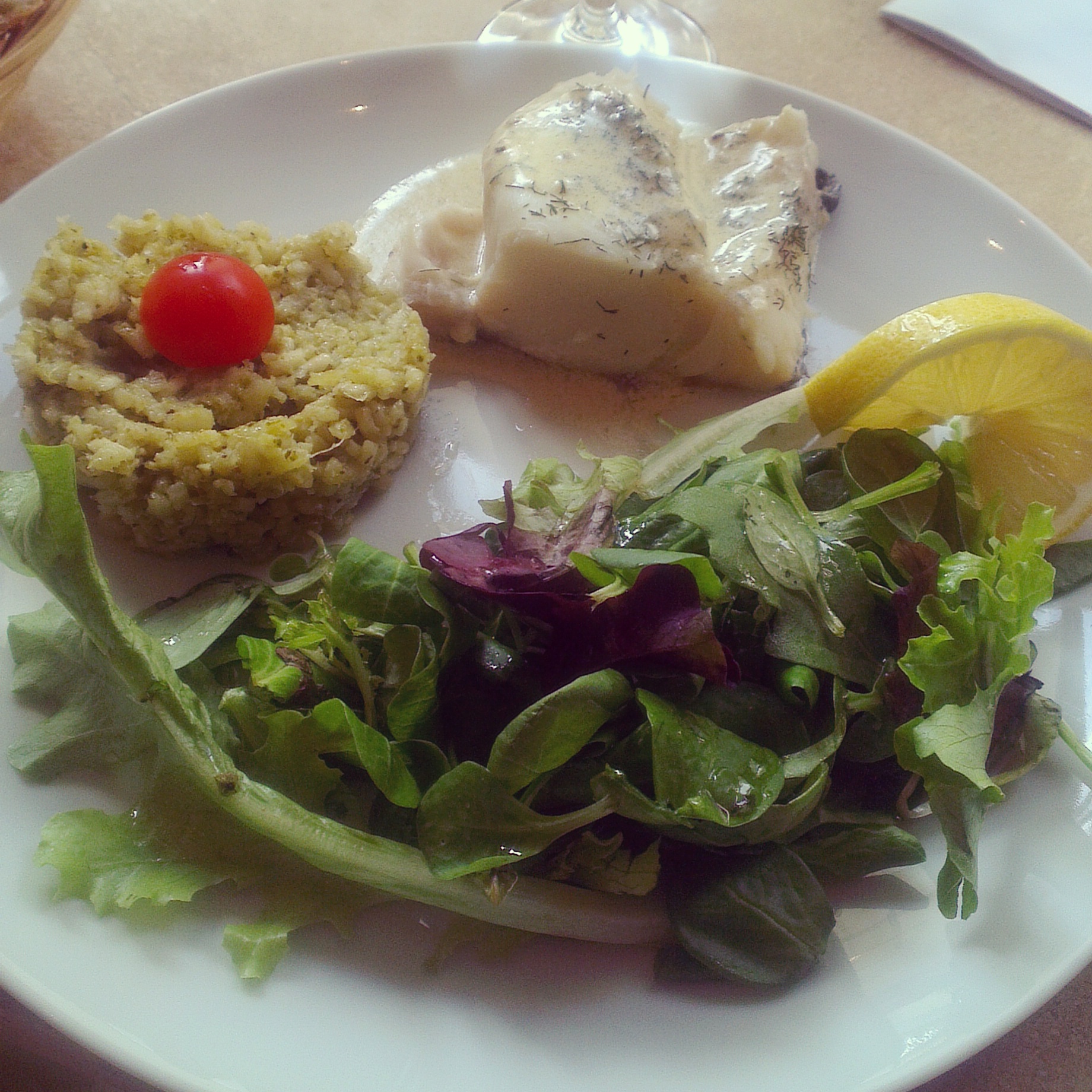 I, alas, was not going to be having one of those delightful Portuguese custard tarts. I am starting my pre pre Christmas diet – the joke of it – and have gone back to my lunchtime rule of if I have a glass of wine then no dessert. I did though order coffee and that was the revelation that makes this place my newly discovered hidden gem in Bastille. The coffee was served with a cinnamon stick on the side and being the curious foodie I am the latter was straight away added to my coffee and used instead of the spoon as a stirrer. 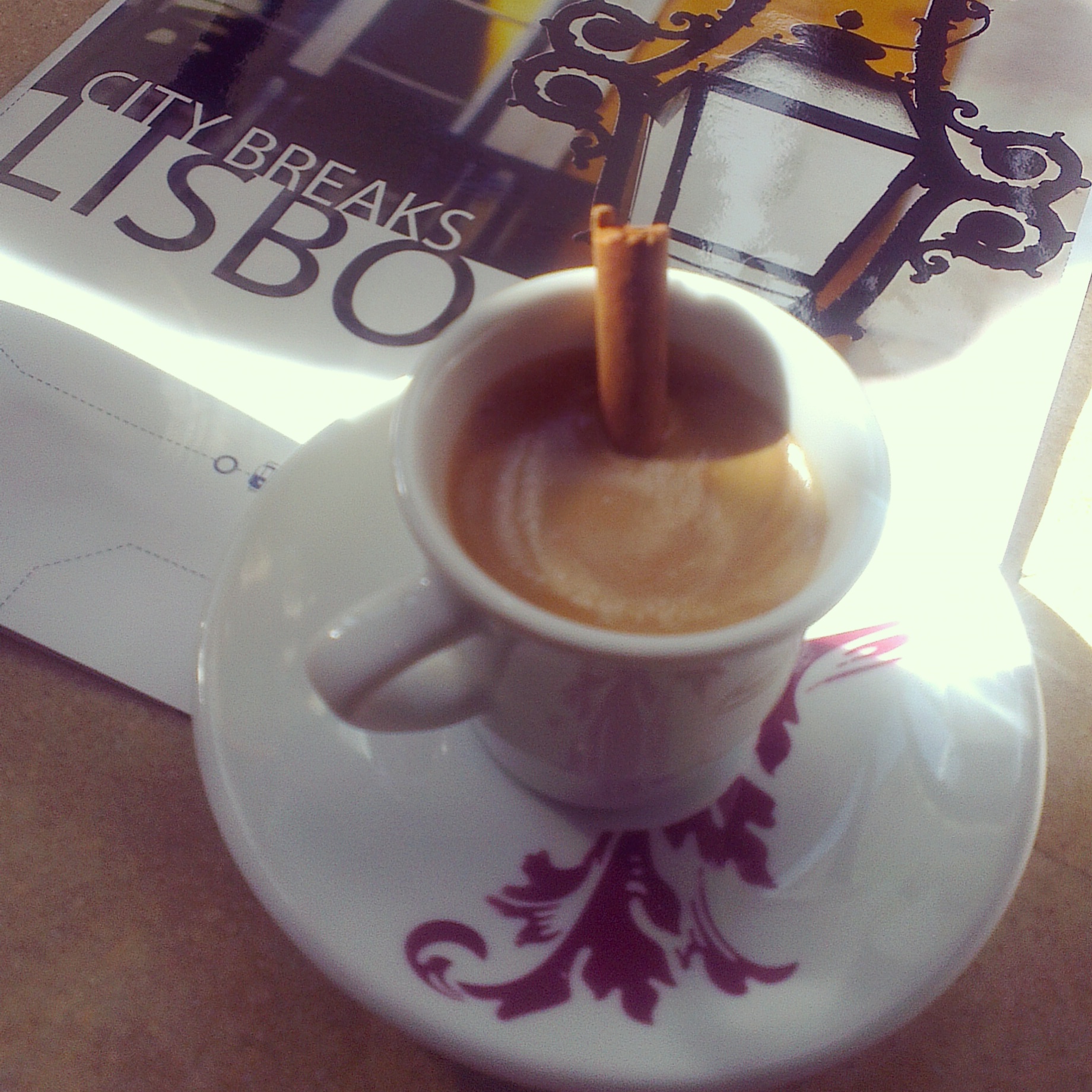 I now only want to drink a coffee with a cinnamon stick – it adds a little heat and spice and in this instance rounded off a very pleasant lunch. I shall certainly be back but next time my choices will be a main course and dessert followed by my current favourite way to have coffee.

Pricey? Really reasonable my lunch menu came to the princely sum of €17 that included the prix fixe 2 course lunch menu at €12 plus a glass of wine and that wonderful cinnamon infused coffee.