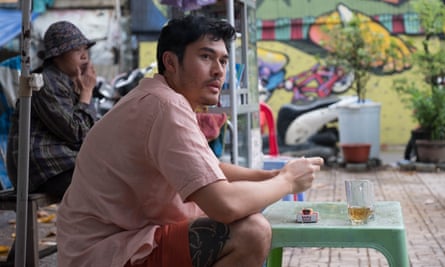 Monsoon is a film written and directed by Hong Khaou. It’s one man’s odyssey to reconnect with his roots and identity. However, if you are waiting for a monsoon of emotion let me start by saying you will barely feel a trickle.

Kit (Henry Golding) returns to Ho Chi Minh City, a place he left at the age of six when his parents fled the regime. He is back to bury his mother’s ashes but more than that he wants to reconnect with his identity, who is he and where does he belong and to help him in his quest he spends time with Counsin Lee and Lewis both of whom are also struggling to fit into a world they feel uncomfortable in.
Monsoon is a deeply personal film for the director Hong Khaou, whose own family fled the Khmer Rouge regime when he was a baby. In making this film, he embarks on his own personal odyssey to retrace the steps of his past and relive the monsoon of emotions.  This is, of course, noble but the issue in making a film about one’s own journey is that you, the individual, must be removed from it and drama added. Alas, Monsoon never really gets going. A languid pace is fine, if there is something to keep it going and sadly in Monsoon there isn’t.
Kit is on an odyssey which we understand from the very beginning. He interacts with those around him including Lewis (Parker Sawyer) the most interesting character of the entire film whose father, a black G.I., slept with a Vietnamese woman. Cousin Lee (David Tran), the one left behind when Kit’s family fled is in effect the mirror to show Kit who he might have been had his parents not fled. Monsoon is admirable for its ambitions but stories like this need either action or words both of which are in short supply in this film. Nothing much happens, one wonders if this wouldn’t have been better off being a documentary. As a film it needs something more than it currently has, even 85 minutes feels too long.

Monsoon is released in cinemas and digital – 25 September