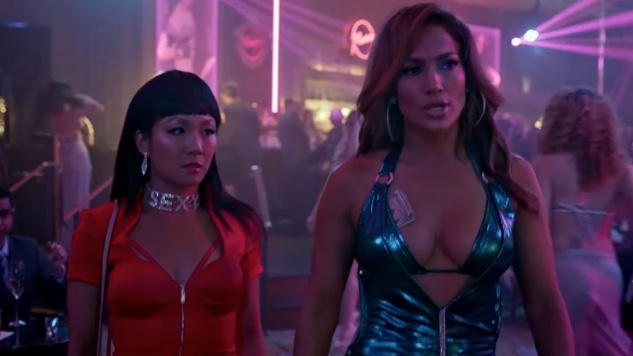 Hustlers tells the true story of a group of strippers who hustle their clients for the cash when the 2008 crash comes. A band of Robina hood and her posse dressed in Perla and grinding for more than tips with a powerhouse performance by Jennifer Lopez.

This film is directed by Lorene Scafaria who co-wrote the script with the journalist who broke the story, Jessica Pressler. It’s a dramatic departure for Constance Wu, from her Crazy Rich Asian success, and shows her acting range. Jennifer Lopez dominates all the screen time she’s given as the all knowing lionness with her little lamb. No scene better demonstrates this than Lopez resplendent in fur taking Wu under her wing and fur whilst they both proceed to smoke their cigarettes.

The story is told in linear form starting off in 2007 with the new girl Destiny (Constance Wu) navigating the stripper club scene in New York with not much financial success until she meets Romona, the highest paid stripper in the club. Everything is going well until the financial crash of 2008 and then the ladies realise if they are going to get paid they need to get creative as the bankers are no longer frequenting strip clubs. The rules of the game change and the hunted become the hunters but not for long.

This film could have been great had the script been tighter and not relied on intercutting the action between the linear story in the club and Destiny telling the story to the journalist, Elizabeth. Had Lorene Scafaria trusted the audience more and taken a leap of faith this film could have felt very fresh and different. As it stands, it is an interesting take on how the financial crisis affected a sector of society often maligned but that is all.  It is certainly evident that a woman shot this film and from the female gaze, the stripper world doesn’t seem as voyeuristic as it could have been without this female gaze. The scenes where the ladies get ready are the best really highlighting the reality of this fantasy world. However, with a patchy script, the pace and interest soon start to wane and as an audience member you might think you’ve been hustled.