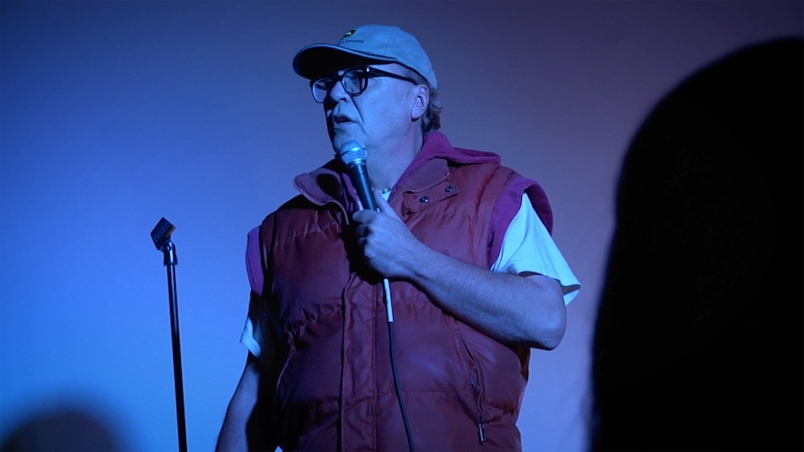 Never Be Done: The Richard Glen Lett Story is a documentary directed by Roy Tighe over a period of seven years. It is a fascinating look at the dark side of comedy for the stand up comedian and what happens when the noise of personal demons becomes too much that the individual turns to drugs and alcohol as unholy companions into his descent into hell.

The subject of this documentary, Richard Lett, is a Canadian stand up comedian. At one time he was in constant demand and despite some rather provocative and profoundly shocking gags should have been even more famous than he ever managed to be as is the view of his contemporaries. However, it was his addiction to drugs and alcohol which overwhelmed him and lead him to being banned from all the comedy clubs in Vancouver. The documentary follows his descent from once respected to someone not only banned but subsequently homeless told with an unflinching gaze.

At the start of this documentary, the viewer collides with Richard Lett. He dominates the screen. It feels grotesque to watch him self sabotage and yet as provocative as his jokes are there is something likeable about the man. He’s that bon viveur who says the thing everyone is thinking, when it really shouldn’t be said. Even after seeing him perform a song about one of the worst serial killers in Canadian history. He’s raw and warts and all. The original premise of the film was not this warts and all but for the director, Roy Tighe to just record him performing a gig. As with all great laid plans, Richard gets kicked out of the comedy club for his behaviour and so starts this story. What is great about this documentary is that whilst it is unflinching and at times difficult to watch it never feels voyeuristic or that Richard is being taken advantage of for the sake of entertainment. Whilst two thirds of the film does feel relentless, the final third is uplifting and I dare you not to applaud Richard at the end, for his better taste in jokes but also the sticking with the sober path.