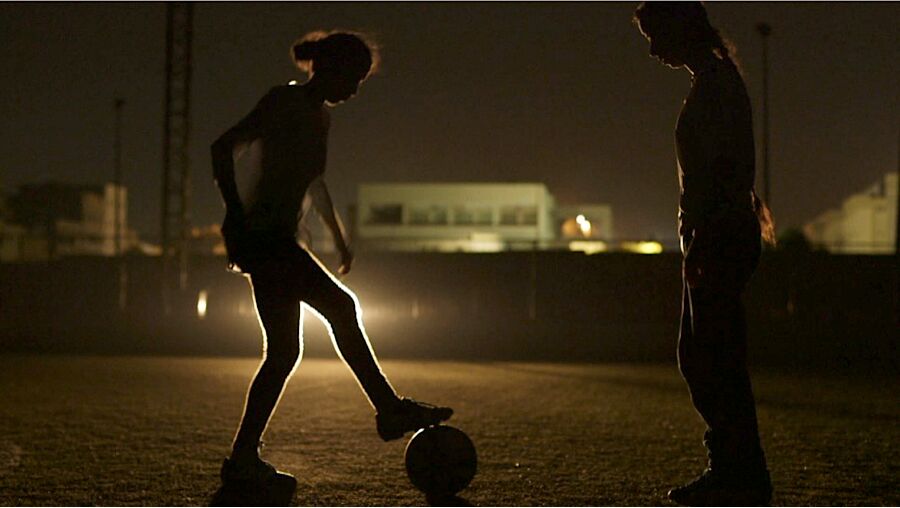 Freedom Fields is so much more than just a story about the first female football team in Libya. In the immortal words of Bill Shankly: “Some people think football is a matter of life or death. I assure you,  it’s much more serious than that”. Freedom Fields is the living embodiment of Mr Shankly’s quote, it tells of the women’s place of society, socioeconomic standing and as is said in the very opening scene of this wonderful documentary by Naziha Arebi these are “beginnings without endings”. Freedom Fields is shot over a period of 5 years beginning with the Arab Spring and the revolution to overturn Gaddafi and then post Colonel Gaddafi.

Freedom Fields follows the team with an added spotlight on three of the players as they fight for the right to play football without restriction and have equality. However, there are those in the State who would like to see this banned. Where ever the team go they are watched by the army, even the Football Federation don’t really take them seriously – they will support the male’s football team but it is too dangerous for women to travel due to “security”. This turns out to be a nonsense excuse – it is not so much security as that the male coaches themselves are scared for themselves. Women’s rights and needs are always secondary. The only place that the women themselves feel free is on the field when they are truly allowed to be, the tournament they are to be in takes place during Ramadan. What follows is a campaign led by Imam’s to turn society against these women. The issue is this – one little drop of freedom will lead them wanting to play basketball, volleyball and swimming. This is the freedom that is feared equality.

We follow individuals from the team – Nama who is displaced from her home – Tawergha.

What is really fantastic and grounds this documentary in realism is the reality is not sugar coated. When the women are not allowed to travel – they say “the revolution is not ours anymore. The revolution is gone. It evaporated.” Or so they believe but the human spirit is a powerful thing and they manage to revive.

Yes, it is, not that we haven’t seen this story the use of sport to examine female’s place in society but that the make up of the team is so diverse made up of displaced nationals on the Libyan team. It is told by the women through their own eyes.

It is the extraordinary every day seeing these women in their daily lives – how they live despite the turmoil around them. What’s great too is seeing that not all men believe the diatribe – there is an army officer who reads some of the hatred against the women and in a powerful scene burns it.

As a western woman watching this film I realised how much I take my privilege for granted. Freedom Fields is a powerful reminder that not all women are free to do as they like and that freedom cannot be taken for granted. It is too an uplifting reminder of the power of sport to instigate change in society.  – Hakima is now a doctor and Fadwa and Halima have opened a football academy to encourage girls from poorer backgrounds to succeed and not limit themselves to marriage and children.

Freedom Fields is released in cinemas on Friday 31 May.