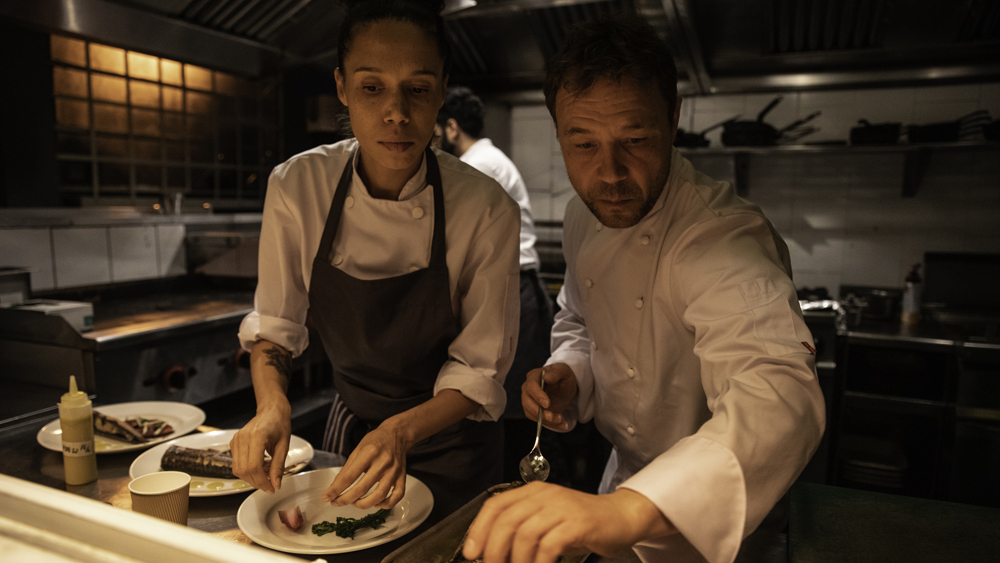 Wow – one continuous 90 minute shot is as bold as visual storytelling gets. To pull this off on the big screen you need the following; a solid gold scrip, direction, cinematography and a stellar cast that can truly deliver. Boiling Point has it all and then some. It is an arresting and visual feast that will keep you on your toes right until the final frame.

Boiling Point centres around chef (Stephen Graham) as he arrives at his restaurant for an evening service. We see him grapple with an environmental health inspection just before the restaurant is due to open for the evening. His ex boss and now superstar chef that turns up unexpectedly with a famous food critic. Plus all the tension that comes with trying to maintain a kitchen of experience and some non experienced staff members whilst juggling an alcohol and drug addiction.

Many films have tried to show the reality of what it’s like to work as a chef but most have failed because they romanticise it or focus on one aspect of chef life rather than looking at all the elements. The writer and director of Boiling Point, Peter Barantini worked as a chef between acting gigs and finally, we have what feels like an authentic look at chef life. Boiling Point is a visceral and heart pounding look at the reality: the highs, lows and all the humour that happen during one night of service. It was a stroke of genius to have it centred on just one night and keep the action in the restaurant and kitchen. The script manages to pull the outside world in without us ever leaving the location and mercifully there are no flashbacks. We quickly realise that chef’s world has fallen apart and that his wife has kicked him out through the phone calls he has with her. The tension is kept on a knife edge, that sounds cliche but it is true, and all the way through Boiling Point it simmers away and every time you think the lid will explode it doesn’t. It’s not all tension, there is a lot of comedy and some brilliant one liners “a low rent Kardashian” that Carly snarls at the front of house when she orders the kitchen to create off menu steak and chips for some influencers.

Aside from The Russian Ark and Hunger, the continuous and long single shot in most films has failed, that is until Boiling Point. It is badass and bold to shot one continuous shot for 90 mins but when it works it is mesmerising and in Boiling Point it really does.

Stephen Graham and Vinette Robinson as his sous chef, Carly are incredible. If they aren’t nominated for a slew of awards then something has gone terribly wrong. The rest of the cast is superb too. So too must an award be given for the cinematography which manages to capture the different modes and lights in the restaurant. The setting is in a real restaurant, Jones and Sons in Dalston and by the end of the film, you want to go and eat there.

First shown at the London Film Festival 2021. Will be released in cinemas across the UK from 3 December 2021.