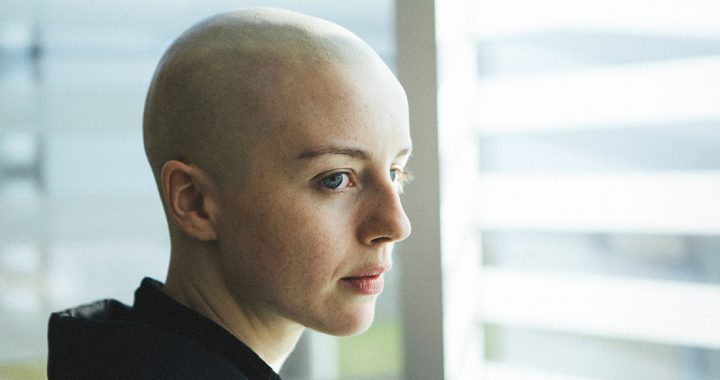 White Lie is written and directed by Yonah Lewis and Calvin Thomas. It is an interesting film looking at the effects of what happens when a devasting white lie takes on a life of its own.

Katie Arneson (astounding performance by Kacey Rohl) is a university student who pretends to be suffering from cancer for the attention and importance it gives her. However, when doubts start to surface she gets embroiled in not only having to maintain the lie but decide if it is worth continuing with and can she bring it to an end.

White Lie is a really simple story with a complex central character. It’s executed for the most part very well. The action starts without explanation, we meet Katie and wonder why she shaves her head and what her motivation is for lying in such a public and manipulative way. What’s great about White Lie is that it provides no answers. It hints at mental health issues but then twists in such a way to make you think this is wilful on the part of Katie. Is it a commentary about social media and validation which greatly affects the twenty something generation who for the most part appear to see it and therefore believe it?  Where a lie just spirals out of controls what are the consequences once discovered?

The entire success of the film aside from the pacing is down to the astounding performance of Kacey Rohl. She manages to add a level of complexity that leaves the audience never sure of Katie’s true motivations but nonetheless fascinated by what the character. The scenes with Katie’s dad are the most revealing. Essentially the characters are asking what is the truth, what you believe, what the other believes or hard cold facts. If you believe something to be true is that good enough? The final denouement at the end weakens the script. It is understandable why it was done but had it ended five minutes earlier it would have been even sharper and more arresting. As it is, this is a grade a thriller with good direction and pace, that will leave you with questions and desperate to discuss with others which is the mark of great art.

White Lie is available to stream on Amazon Prime in the US and Curzon Home Cinema in the UK.