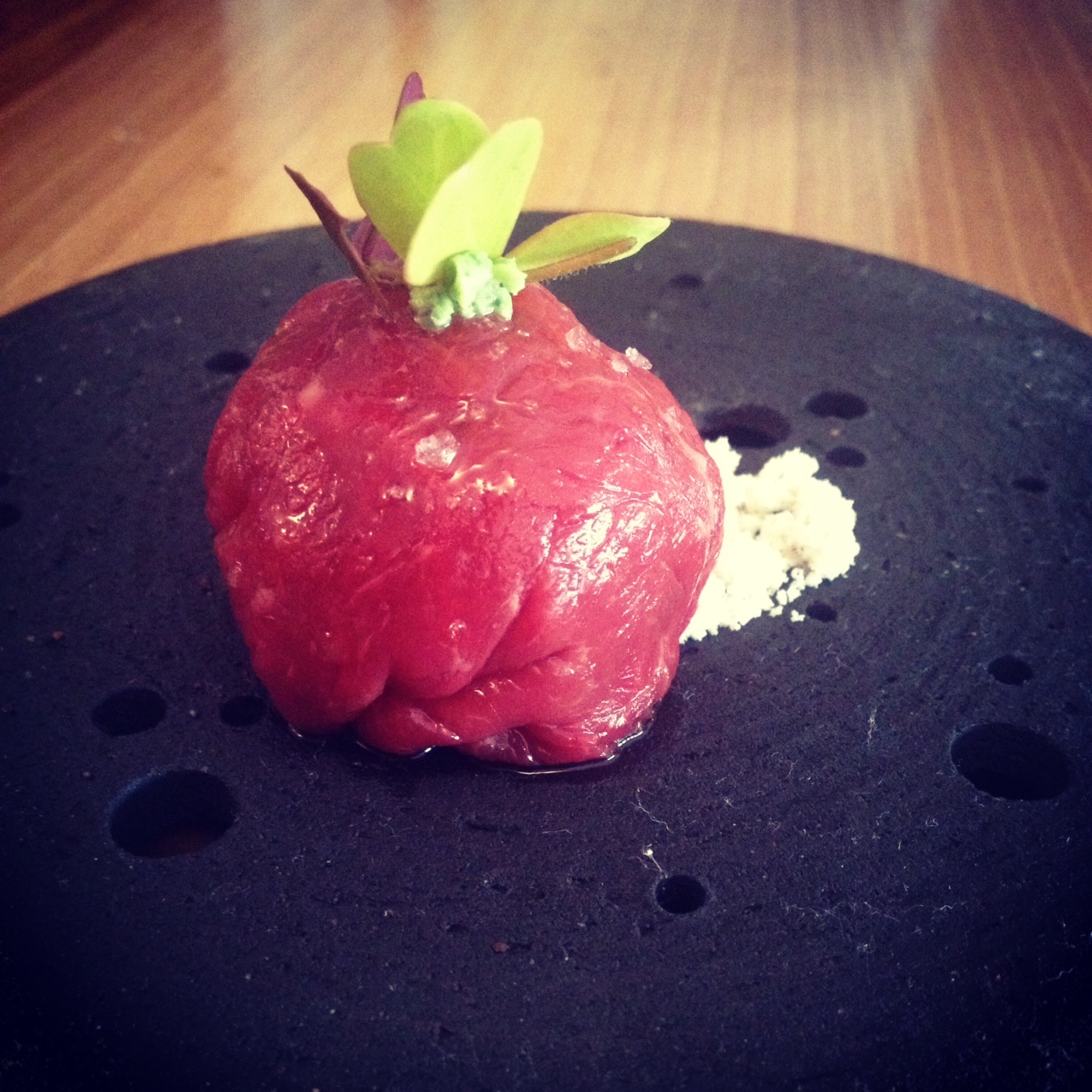 Where does an indecisive, solo dining, 30something, finicky, foodie choose to eat on her birthday?

Ever since I started working over 15 years ago I made a vow to myself not to ever work on my birthday.   I wasn’t working the day I came into this world so why should I be on the anniversary of that day – simples! It’s  just that this year I had no idea of what I wanted to do.  It felt as if I’ve come full circle 4 years ago when I came to this country I took myself to Angelina for their legendary hot chocolate and walked around my new hometown. Fast forward 4 years and I was going to be spending the day alone again. I wanted award winning given Liquid Marmalade is now an award winning blog having been awarded the Golden Boot by Horton and Boot. Do check out this exclusive private social network for independent travellers you won’t be disappointed!  I briefly considered a Michelin starred restaurant but which one in a city containing 70 of them?   I didn’t want to choose, when you live alone you have to make choices every day, and then I stumbled upon a New York Times article about an ex Arpege chef who opened his own restaurant in December 2013 and it’s carte blanche – well hello David Toutain – feed me please!

The restaurant is located in the ever so discreet, we are rich but no vulgar displays of it, 7th arrondissement of Paris a stones throw from Les Invalides. David Toutain it would seem is a discreet too as I turned into the street and walked right past the restaurant and thought where can this place be. My advice is to look up for the little sign with his initials DT carved into wood and also his books are piled up in the corner of the entrance way.  The welcome was so incredibly warm and as far removed the usual Parisian welcome aka the Gallic Shrug. I was led up the stairs to my table past the kitchen and settled in.  From pictures of the restaurant that I saw on Le Fooding, an excellent bible of restaurants in Paris, the restaurant looked cold and severe. Nothing could be further from the truth and it just goes to show never judge a restaurant by the stock shots. There are a lot of textures – woods, a blackboard with scribbles on it and white.  It’s as if the decor mirrors the myriad of textures that are presented in the dishes. 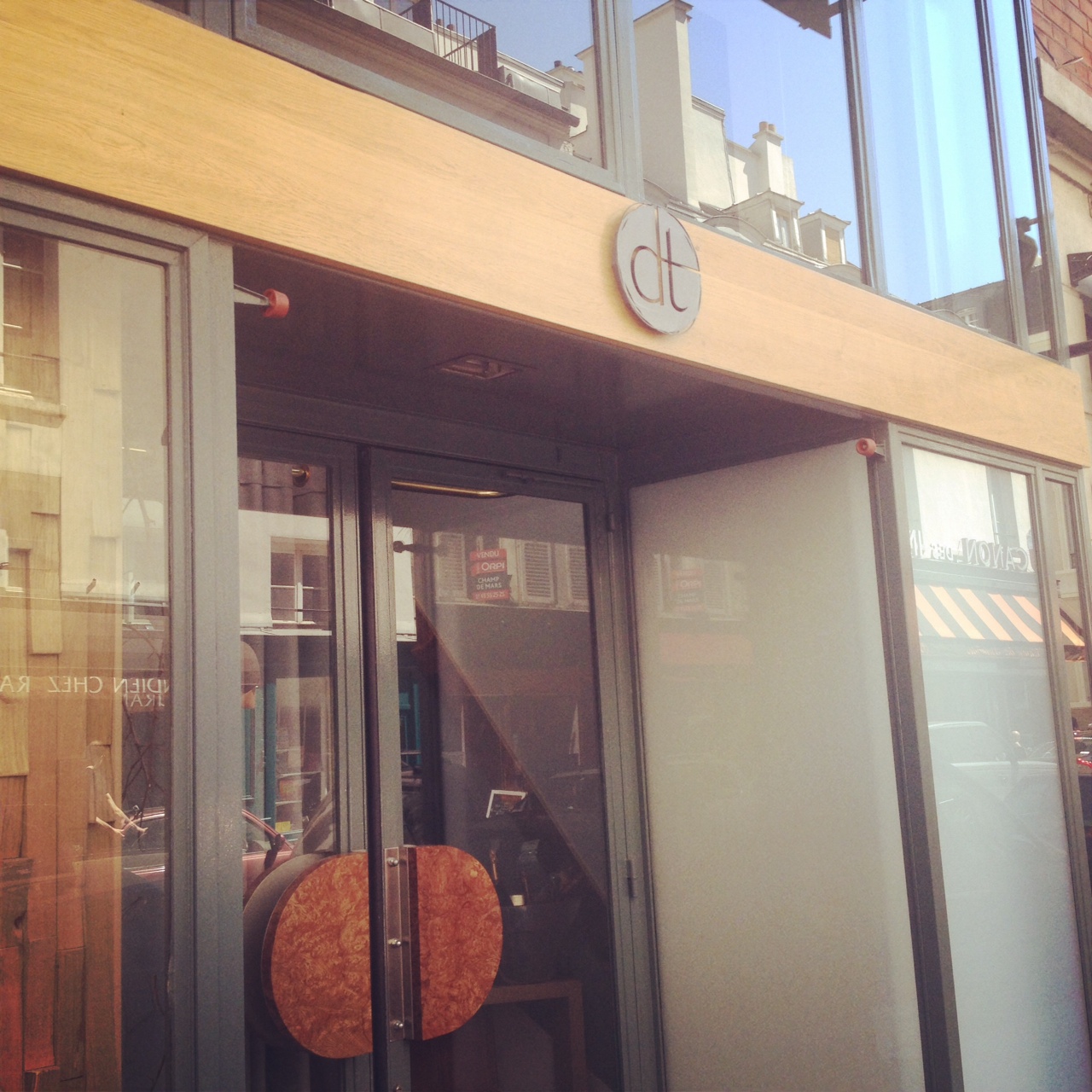 This is the place to eat solo or otherwise in Paris in 2014, there were a few empty tables when I arrived at 12.30 but an hour later every table was taken.  The excitement is palatable in the restaurant as there is no menu, yes it’s Carte Blanche.  As I said earlier the restaurant is set on two levels and I was seated on high – like a princess in her tower looking down. There is a quiet calm in the restaurant and no music, thank you, just conversation and people’s attentions focused squarely on food. For this solo diner, my waiter provided me with David Toutain’s book so I could learn more about the man himself – a nice touch. David has worked in NYC and it shows the tables are a good distance apart ie you can have a private conversation here. Oh and did I say the chef cooks in his kitchen and walks around the restaurant.

Ooh I do so love surprises. I looked at other people’s dishes but I had no idea what to expect or what exactly they were eating. When you book this restaurant and you do need to book none of this rock up and hope for a table business. I booked 10 days ahead and there was no issue getting a table for the time I wanted. Anyway, they ask you if you have any dietary requirements etc. When my waiter came to welcome me on gastronomic stroll through David Toutain’s world he asked again if I had any specific requirements or things I didn’t like to eat. The question took me back to a hot, humid day in Xiamen, China when I was asked the same question and was served my food nightmare, you can read it here. However, older and a little wiser I thought if I reel off everything I don’t like I might miss out on some amazing dishes so I just said I don’t care for poached, soft, anything eggs in actual fact I am intolerant to raw eggs. Very well he said. Then with my very large flute of champagne I sat and waited. It’s surprising but I felt as if I was at my own private birthday party playing pass the parcel – not sure what surprise would be revealed when the paper was ripped off when the music stopped. 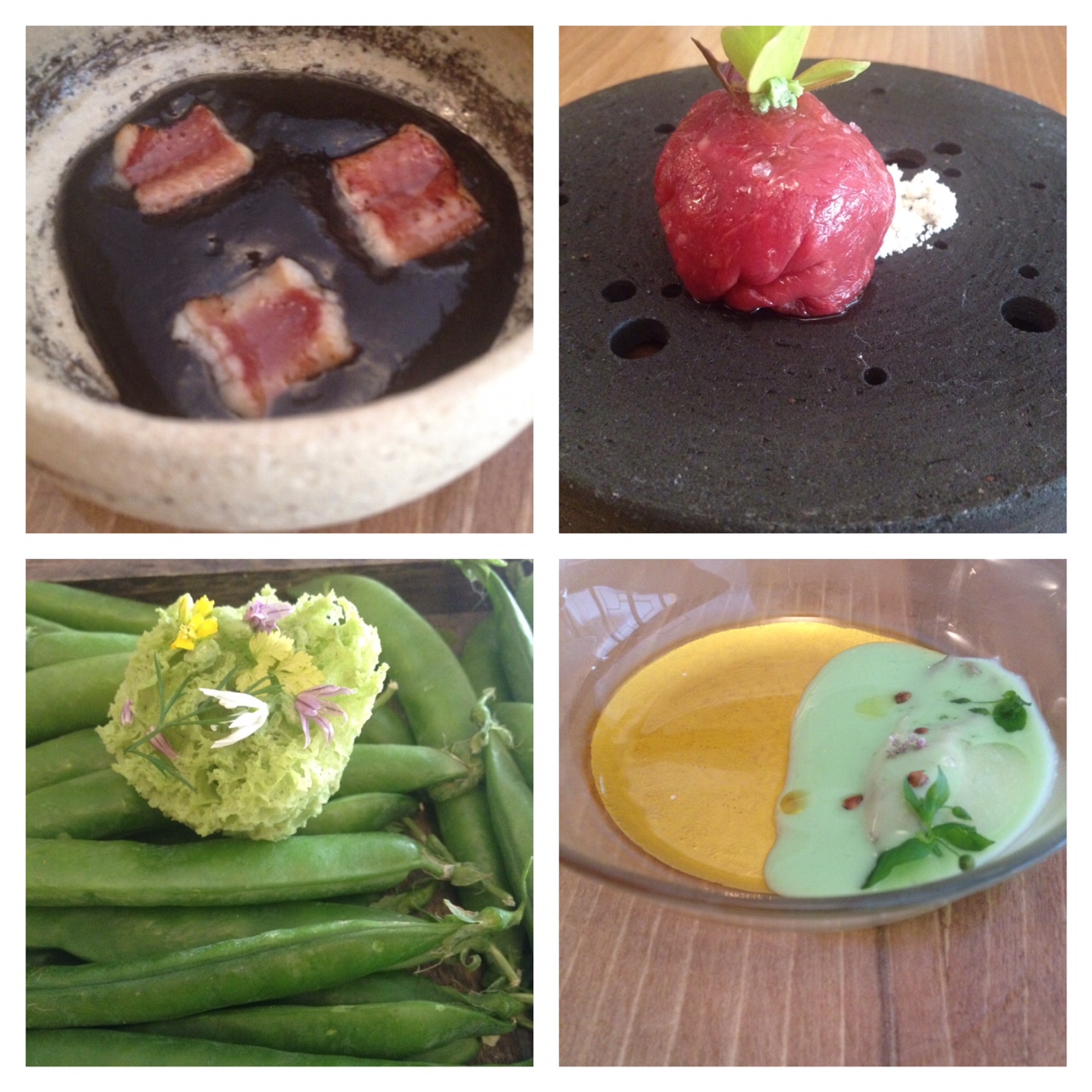 The first surprise were “Les Snacks”, that the chef sent up at different points during the menu, or amuse bouche if you would rather an old school term. I quite like the idea of using the term “snack” especially since the French are so anti-snacking.

1. Carpaccio of beef marinaded in a strawberry vinaigrette and served with a nut crumble. I must have had a “Pretty Woman” look about me as he added, no doubt to save my blushes, you eat it with your fingers. As the French say it was une tuerie/incredible.  Layers of beef rolled into a ball with a slight hint of strawberry the sweetness tempered by the vinegar and rounded off by the nut crumble. Well thank goodness I was wearing an elasticated skirt I thought.

2. Swiftly followed by a pea sponge cake: the perfect marriage of pea and cake and the peas are just for decoration my waiter told me with a wink. It was so light and buttery.

3. Barbequed eel in a black sesame sauce – if I had seen this on a menu my eyes would skip right past it. This was a revelation and had me making a mental note to try more eel in future – the smokey flavour, the non chewy texture (which I think always stopped me ordering it) bathed in an unctuous black sesame sauce.

4. A poached oyster in a cucumber and green apple sauce. I wanted more. 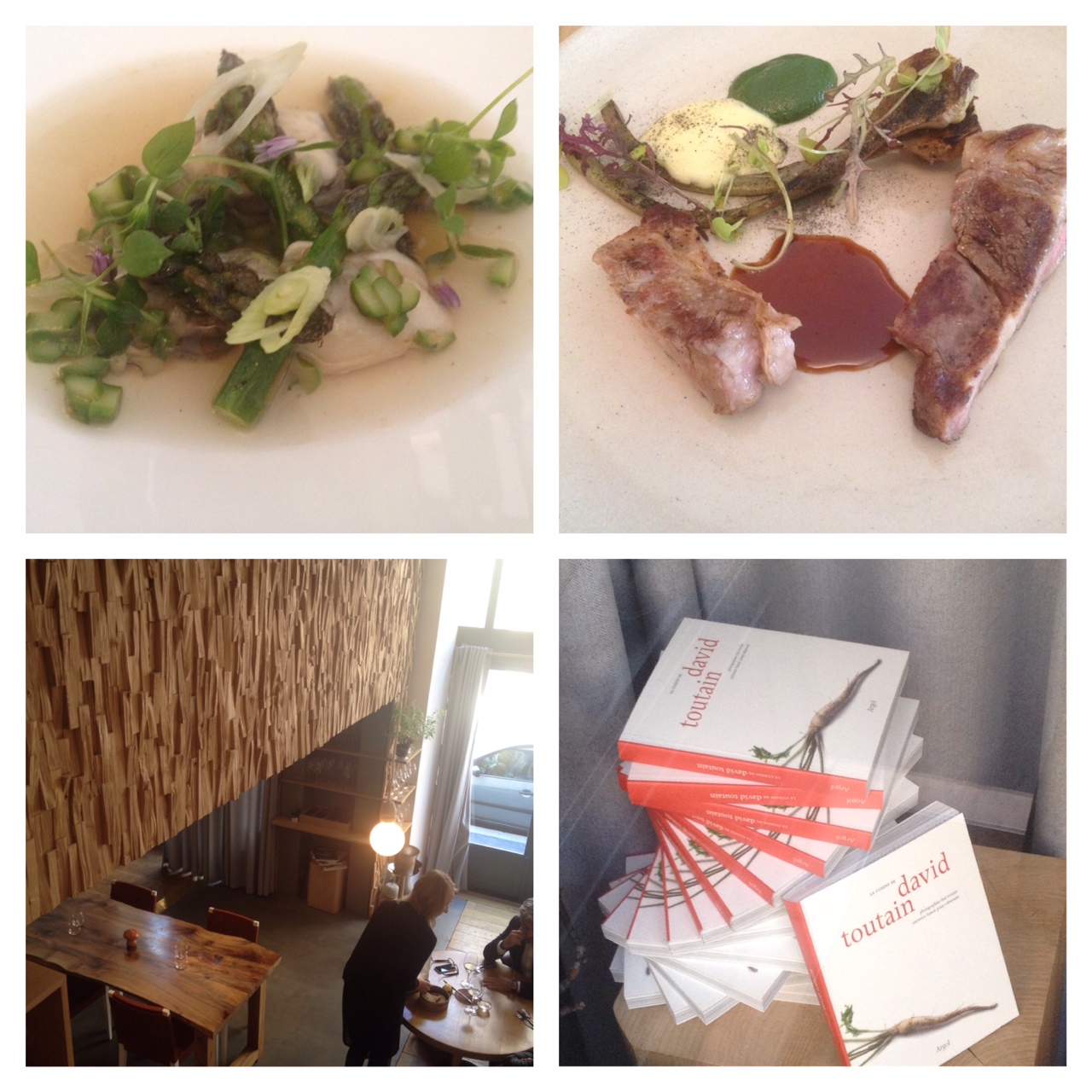 Poached oyster in a lemongrass broth with crunchy green asparagus. I don’t know what kind of foodie I am because I don’t care for watery soups, broths or anything of that kind. I like thick soups. This soup kicked my finicky senses to the kerb – it left me speechless. I cleared the bowl – the textures of the silky oyster, the crunch of the blanched vibrantly green asparagus and the palate cleansing lemongrass. In the words of Oliver Twist – Please David can I have some more.

This is where the fun really begins because I had drained my champagne flute. The waiter and I locked eyes my glass was empty when it needed to runneth over. He started to explain that we would be moving onto the main course and I interrupted and said what about the drink. He went to check with the chef and came back and said I would be having red meat so a little glass of red wine peut-etre/maybe. Of course, nodding as you do, and then I was presented with pork shin (?!) accompanied by a green herb sauce and an espresso one and beurre noisette. Here we go again, I am not a fan of pork – I like the by-products bacon, sausages etc but not roast pork. Yes I am odd and I assume that totally. Was it good well I had to forget that I wasn’t at home and pace myself, putting my knife and fork down between mouthfuls to slow myself down, as it was divine.

Now I had told them by email when I booked it was my birthday in the hope that it would assure a reservation. This is truly the place to eat in Paris in 2014. They must have noted down it was my special day and before dessert came I was presented with a rose. I felt incredibly special – it was such a darling thing to do – a beautiful red rose as well as a tablet with happy birthday written on it and a candle.  I honestly can’t remember the last time I blew out a candle on my birthday! Then to top it off David Toutain, who really is so humble, happily posed for a photo with me and wished me a happy birthday! 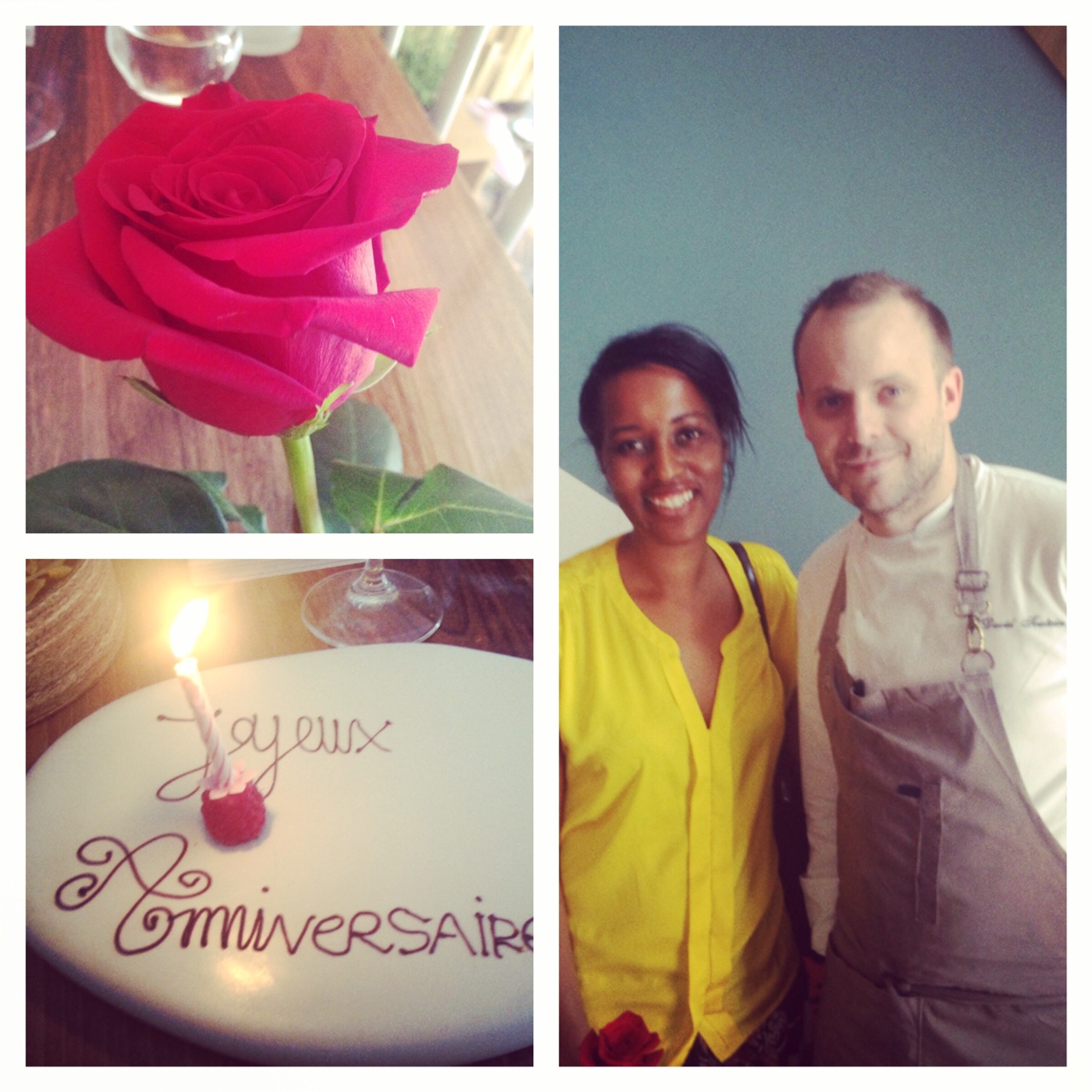 The glass was empty, I was a little light headed, the measures are generous here. Here in France, most people seem to have a look of disdain if you, as a woman, have more than two glasses of wine. I suffer that look quite often – eek. A little dessert wine maybe was the question posed and I responded slightly glassed eye – oui! There was a pre-dessert of coconut ice cream in a cauliflower cream nestled on a bed of white chocolate. I think more restaurants need to introduce pre-desserts!

The dessert was a mini treasure hunt of nuts and sliced dried fruit concealing a quenelle of ice cream (less precise descriptions as I was merry). What I do remember was the explosion of flavour and textures contrasted with the slight warmth of freshly roasted peanuts and coolness of the ice cream. 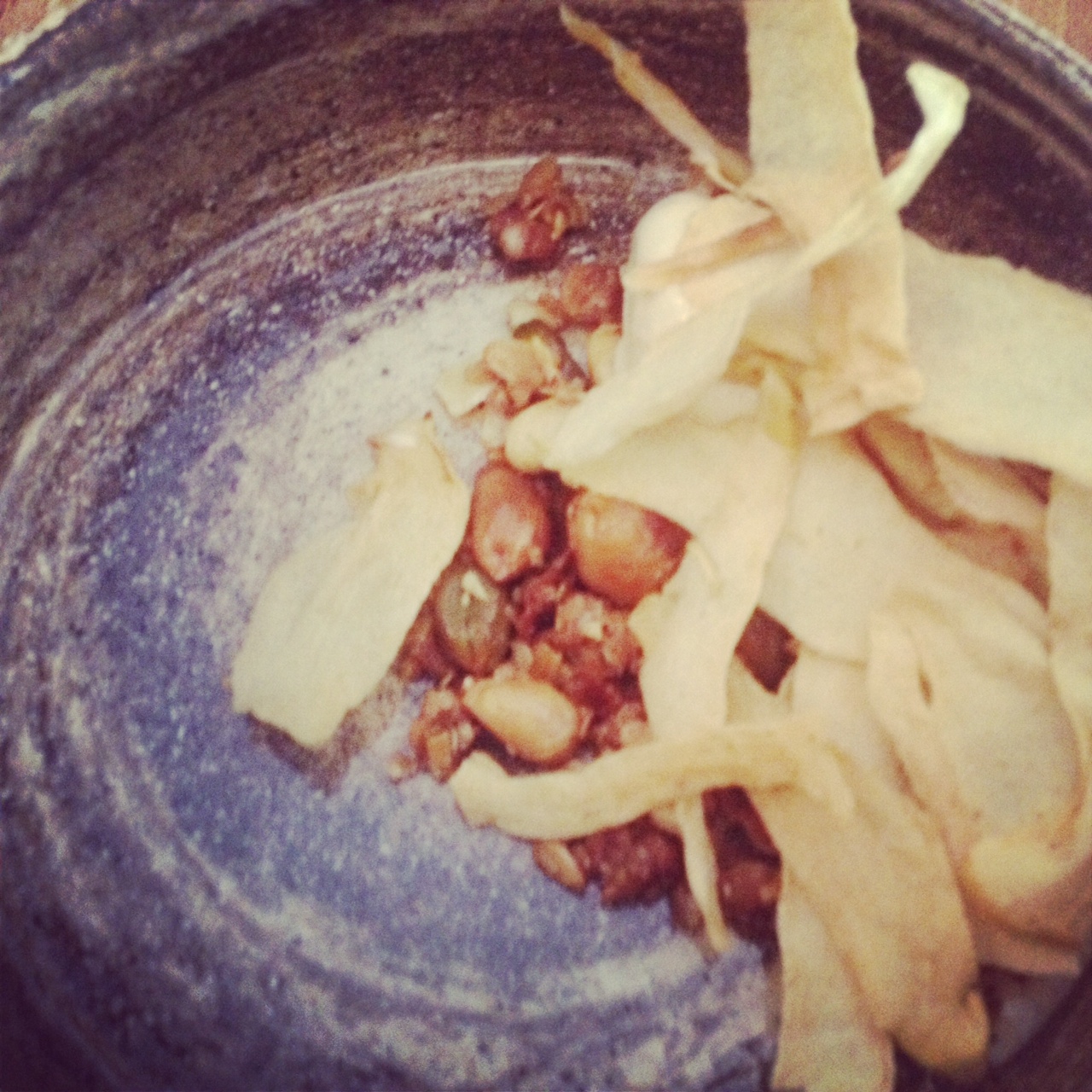 I left here 3 hours after I arrived, good food should not be rushed and there is no rushing here. What I can say with some certainty is you won’t have what I had but what you will experience is sheer culinary mastery in action. I would count this as one of my best meals in Paris and plan on bringing friends who come to visit me in Paris. After my culinary stroll in David Toutain’s world I was glad of the stroll along La Seine to clear my head and sober me up a little.

Pricey? Lunch was €44 although mine came to a very reasonable €89 in total including champagne, red wine, dessert wine and coffee. Dinner is a little more pricey at over €100 but for the quality of the food it is incredibly good value for money.