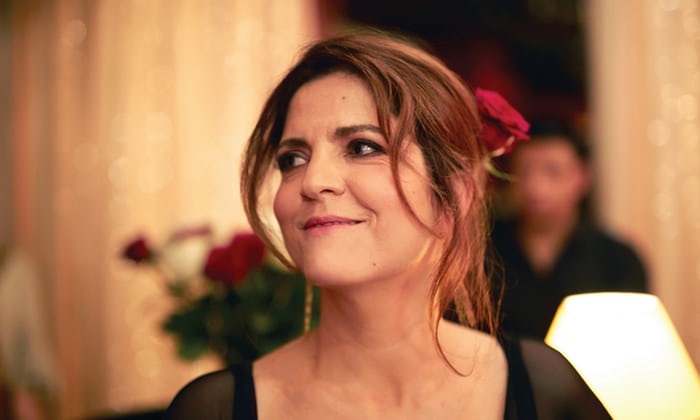 Menopause just got hot! Although that was always the case for women suffering from
It. I Got Life (Aurore) tells the story of 50 something Aurore who is suffering from, or is it through the menopause, wondering who she is. One daughter has already left home and the other is in the throes of a love affair to end all love affairs. Her ex partner, Nanar, lives down the road with his new family and she works for a misogynistic boss who insists on calling her Samantha because it sounds sexier than her actual name. When life couldn’t get any worse she bumps into an ex as she pretends to be the prospective buyer of her best friend’s, Marie-Noelle, flat. What life does Aurore have now that her periods have stopped?

The start of the film hits you right between the eyes. Well as a woman it hit me. A thing I never considered, and luckily have a few more years before I do, am I still a woman once my periods stopped. I cried with laughter when Aurore tells her daughter Lucie that her grandmother told her the day that she got her first period she was now a woman. Every woman gets told it, I know I did. But, Aurore asks what am I now that I don’t.

Blandine Lenoir’s script and direction is deft enough to avoid the cliches. It is refreshing how it asks the questions how come medicine can replace hearts, lungs etc but has no cure for hot flashes/flushes suffered by menopausal women. I Got Life shows French society as it is today that women are defined by their worth as: mothers, femininity yet when you get to a certain age that’s it. This film is a departure from the usual films that are made – it shows the suffering that menopause is and also how women who are 50 are wondering where their place in the world is now. I particularly enjoyed the use of Nina Simone’s I Got Life with Aurore imagining her younger self dancing with her young daughters – it was both nostalgic but strangely uplifting. Aurore still has life.

Also the friendship between Aurore and her best friend, Marie Noelle is one that most women will recognise. As is the scene where Aurore is brushing her teeth at the same time as her youngest daughter, Lucie and managing to have a conversation with her. Those scenes are sublime in their authenticity. The film whilst dealing with the central issue of menopause and change, somehow also manages to examine racism, sexism and ageism in French culture again without being too heavy handed. The central performance by Anges Jaoui holds this film together – it is nuanced yet powerful performance that keeps the viewer transfixed.

Unusually, for a film where the female roles are front and centre, the film manages not to reduce the male characters to bit parts. The characters we see on screen are fully formed.

Cinema/DVD/Streaming? CINEMA!! Take your girlfriends along or a man so he can see what ya women go through! I want to see more of these films please so let’s support them by seeing it on the big screen.