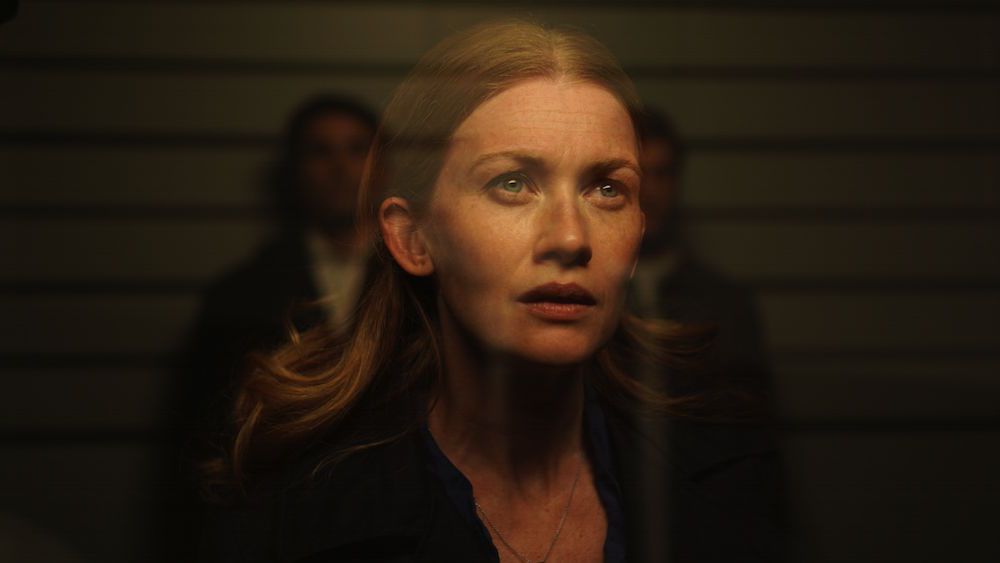 What if you lost your mobile phone – who would someone say you were? In Never Here a performance artist finds a stranger’s mobile phone and creates a whole art installation about his life, yes you guessed it – without his permission! All of this is neatly wrapped up in a thriller with echoes of Rear Window meet David Lynch’s Blue Velvet. Writer/Director, Camille Thoman, assured direction and subtly told tale features the last performance on film by Sam Shepard before his untimely death. Even after the credits roll on this disturbing and intelligent thriller, you’ll be left asking yourself and friends: who would someone say you were if they found your phone?

Miranda Fall (Mireille Enos) finds a strangers phone and creates an art installation of his life. She lays his life and robs him of his intimacy and privacy. Later that night, after her, Paul Stark (Sam Shepard) married agent witnesses a violent attack from her bedroom window she calls the police and pretends to have witnesses the whole event in order to protect, ironically, his privacy.

This is an interesting question where this film is concerned. I think it is. Rear Window by Hitchcock has often imitated and (gasp) remade but never really improved upon. Never Here isn’t seeking to remake Rear Window but give us a refreshing different take on the ideas contained in it. The film opens up a very timely commentary on: human vulnerability, truth, lies, privacy in a time when everything no matter how inane is shared on social media and false images. In this way it is diverse, we haven’t really had this type of examination and done in such an intelligent way for a long time. It’s because of the intelligent script that the issues thrown up by this film really get under your skin.

A must see for an examination of what identity means and beautifully nuanced performances from Mireille Enos and a hauntingly sublime final one from Sam Shepard. Never Here is a psychological thriller for the social media age with a great mix of tension, imagery and cinematography. Film is art and this film really encapsulates that with the use of colour and imagery. The film really leaves you thinking about loss of identity, intimacy and how our mobile phone is, sadly, part of our identity. However, as a film and a distinct piece of storytelling it really works. There are some striking images especially  at the beginning when we watch the character of Miranda Fall strike poses for one of her performance installations and her lack of regard for others intimacy. This is nicely contrasted later on in the film when she then becomes vulnerable and she begins to question who is she and what is real. The tension is maintained throughout with the pressure mounting with every scene until the finale.

Never Here is released in cinemas across the UK on 21 September 2018.