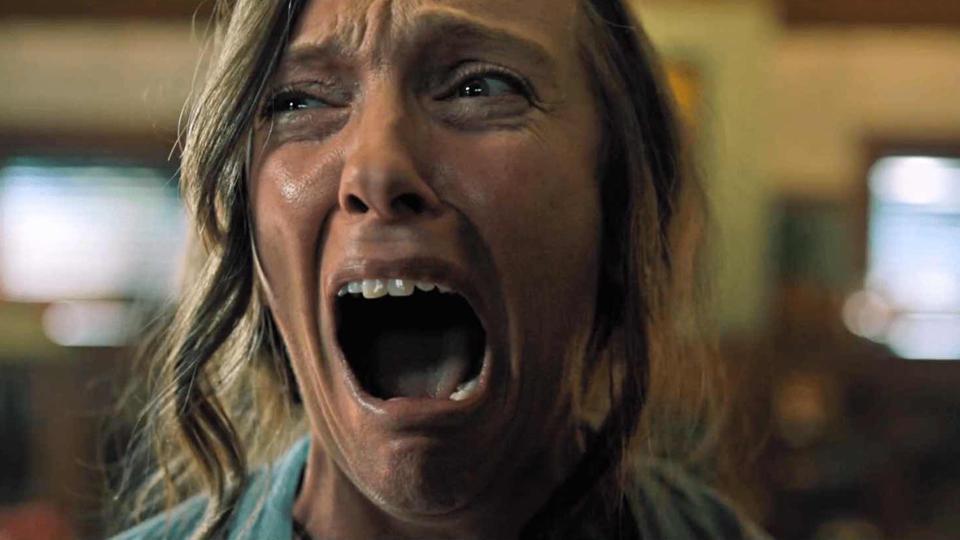 Hereditary tries to inherit the spine-tingling, horrifying title of the 1960s and 1970s horrors such as Rosemary’s Baby and The Exorcist but fails to deliver. It fails because Hereditary loses its nerves and rather than being an interesting examination of maternal horror and mental illness slowly veers into a pastiche of every famous horror you’ve ever seen.

Hereditary starts with the death of Annie Graham (Toni Collette) mother, Ellen. She lives with her husband Steve (Gabriel Byrne) and their teenage children Peter (Alex Wolff) and Charlie (Milly Shapiro). Slowly, Annie starts to discover that her mother has left her a sinister and supernatural inheritance or, maybe she’s just inherited the family’s other illness, insanity.

First off – Hereditary is not the scariest film since the Exorcist. It is a thriller with a few horrifying scenes. The first 30 mins lead you to think this film foreshadows a new dawn in horror films. It does not. There’s lots of foreshadowing, very clever use of sound and reliance on tried and tested horror techniques. However, the ending just descends into a mash-up of every famous horror film you’ve ever seen: The Exorcist, The Host

I’m genuinely terrified of horror films – never watched Saw, The Ring etc. It does try to be like a 1970s style film but doesn’t come that close. The Iranian horror of 2016 “Under The Shadow” is scarier as is “Sixth Sense”. Yes, the Sixth Sense. The first 30 mins of Hereditary is clever, the use of sound and the unexpected twist and how the camera maintains its focus on Peter’s eyes heightens the suspense, however after that the taut grip starts to loosen rapidly.

Yes, the story is somewhat diverse. In his debut feature, Ari Aster introduced a genuine mental health theme that had he kept his nerve and followed through on the idea, eg. that a catastrophic event such as losing a loved one can bring on a psychotic episode, would have made for a very interesting film. The horror of late has turned its gaze onto maternal horror and questioning the paranoia that motherhood can inflict on certain women – is it all in their mind, are they hysterical? In Hereditary, toxic motherhood is briefly touched upon when Annie states that she and her mother were estranged. This was actually one of the more interesting moments of the film and should have been explored more. I think this was examined and handled better in Under The Shadow (2016).

How do you know when a film doesn’t deliver in a particular genre? The audience starts to laugh at scenes that are supposed to be genuinely terrifying. This is a wait for dvd or if you get a free or have an unlimited cinema card then possibly go and watch in the cinema. It is not worth paying London cinema prices, £15 (ahem)!

Hereditary is on general release across the UK.