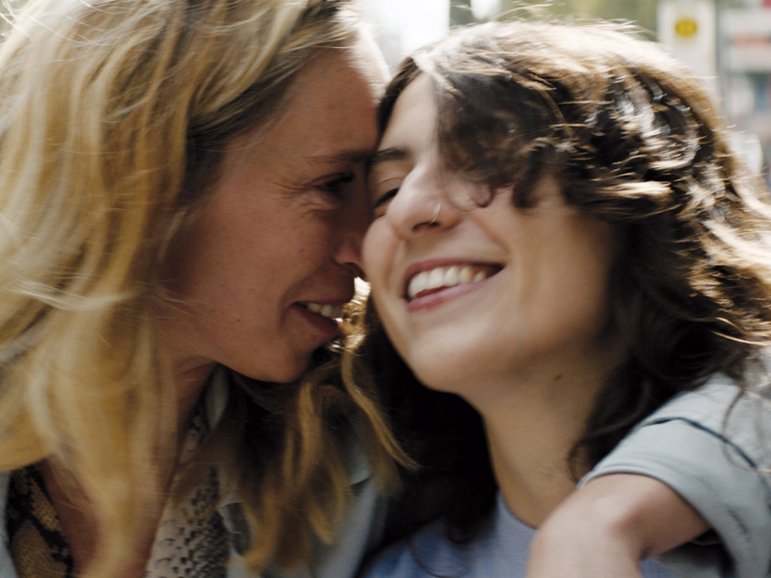 Bliss from writer and director Henrika Kull is a refreshing and thought provoking love story between two sex workers that throw up questions regarding identity, vulnerability and attraction. We are used to seeing sex workers portrayed on screen through the male gaze, yet here Henrika Kull has managed to somehow make the actual real sex, and there is a significant amount, a secondary, even tertiary part of the story with the main focus on the attraction and emerging love story between the two leads Sascha (Katharina Behrens) and Maria (Adam Hoya).

Bliss is set in a working brothel in Berlin called Queens. Forty something Sascha has been working a long time. When the newest sex worker, the young and mysterious, Maria joins there is a spark of attraction between the two women which leads them on a journey that neither would have predicted.
What Henrika Kull does well is to sidestep the melodrama to present an intimate and honest love story. Rather than the idealised view of sex workers or being saved by some sort of Prince Charming as was the case of Pretty Women. This is a story that feels rooted in reality. These sex workers are performing a service and it is a job. However, there is more to them than just this. What is their identity? Who are they away from the brothel? The characters are complex, Sascha has a child and life she clearly left behind in her home town. Bliss is short and any longer and it might well have lost itself into a cliche rather we are provided with snapshots of what love is.
The script leaves enough room for the actors to act and both give good performances especially Adam Hoya.  Whilst there are a number of non actors on the screen everyone is still acting. It is refreshing too as we are not given a huge context setting rather as an audience we are required to engage our brains and watch attentively.
There will be some that are perturbed by how much sex there is but what is interesting in the way the film is directed and the excellent cinematography, is that the sex fades into the background. It is just a job and a job doesn’t define you, so why should it be the case that a sex worker is defined by theirs. I thought this was the most interesting aspect of the film. Sascha who is older clearly feels defined by her job when she hears Maria describe herself to friends of Sascha’s ex as a performer. Sascha immediately says that Maria is a hooker like her. It is dialogue like this and the silences that really lift this film from what could have been quite a graphic yet bland film. Bliss is smart and interesting and the female gaze both in front and behind the camera really gives the film an interesting tone and allows entry into a world that most of us have never frequented without a cliche in sight!

BLISS is released in selected cinemas and also available on demand on Bohemia Euphoria from 24 December.