Did you know that for 6 months of the year I work for the French government?

Neither did I, it came as a great shock to me too so let me explain.

August is the month of summer holidays. It is also the month in which the French tax man sends you your tax bill, it appears that some people in France work during August. Welcome to socialism because we’re all in this together! I returned from two weeks in idyllic Greece and her islands to see this year’s tax bill for nearly €4,000 having hoped the projection I had seen in June was wrong. There is tax at source in France and then there is extra tax, everyone has to submit an annual tax declaration to see what extra tax they will have to pay,  what does the latter mean and moreover how is it calculated nobody seems to know or more importantly understand but lots of people spend days if not weeks calculating how to pay less of it. This is my contribution to the French government €4k so basically for 6 months of the year any potential savings I could put aside doesn’t actually happen as they have to be paid back to the State and I just see them going up. Looking at the bill I just thought I am going to be eating rice for the next few months and so I figured I better eat out ‘one last time’ to see how I can create fancy rice when I cook it at home. The cuisine of the moment seems to be Korean and bibimap is where it’s at.

Jules and Shim have set up shop on one of my favourite foodie streets in Paris rue des vinaigriers in the 10th arrondissement and a stone’s throw from Canal St Martin. It is a small restaurant with two tables inside and a couple of the pavement. Jules and Shim are partners and decided to open a Korean style picnic restaurant where they create the Korean dish bibimap to be eaten there or taken away and possibly eaten, weather permitting, by the canal.

There isn’t really any ambiance as such to speak of but I’ve walked past this place many times and it always looks inviting maybe because the frontage is painted in yellow. However, yesterday I was in need of rice and a cheap dish and so asked if I could sit anywhere. There were a couple of tables on the pavement. I was the first customer and early it was only 12.15 but was given free reign and once I sat down others soon followed. 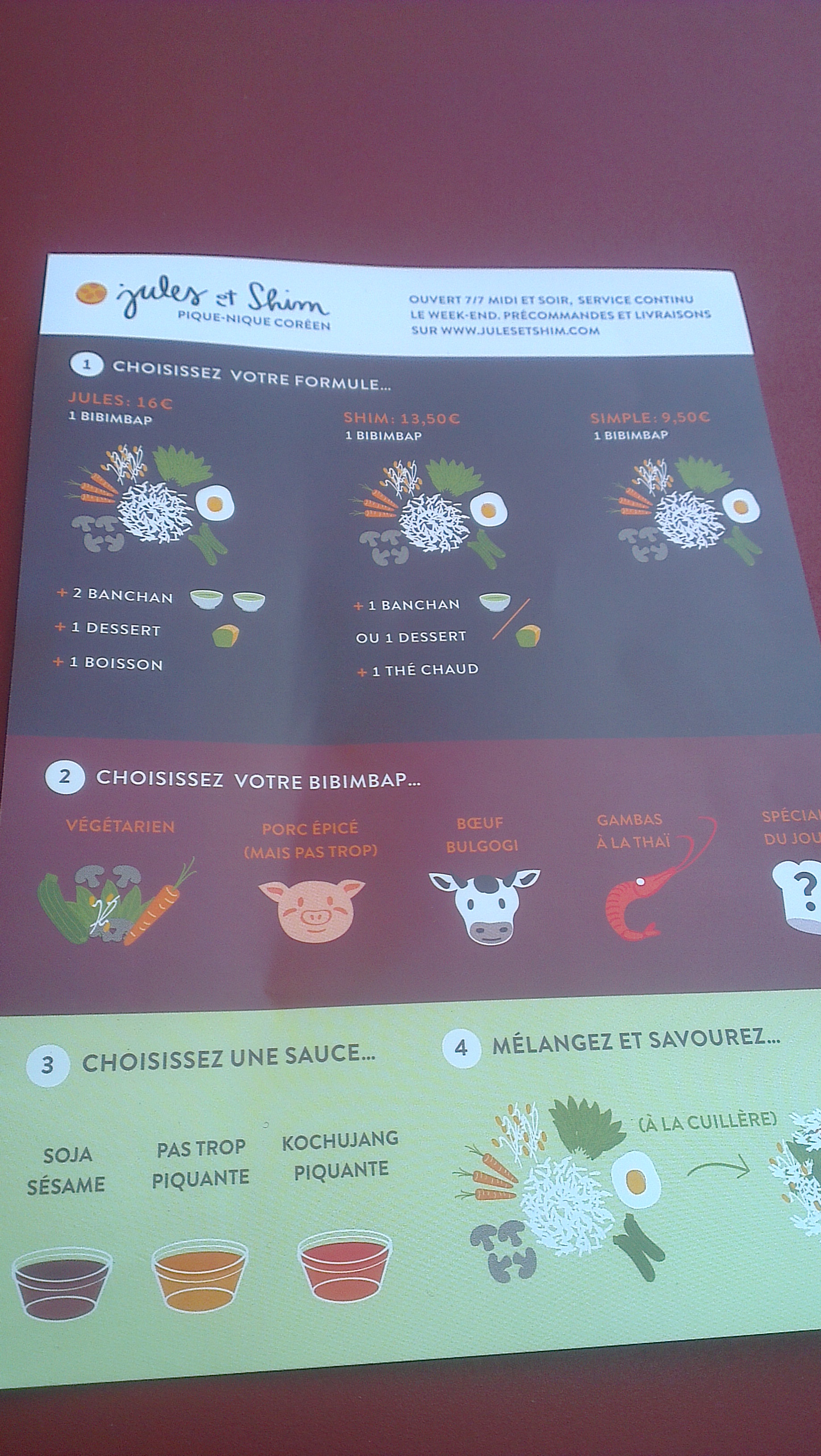 I really liked the layout of the menu it was clear, great use of graphics, and explained exactly what bibimap is a mixture of a choice of: vegetables, prawns, chicken, beef or the special of the day which a selection of vegetables and rice and topped with an egg. There are extras on offer including kimchi the spicy Korean relish to be eaten with the bibimap as well as a choice of three sauces: mild, medium or spicy. I chose curried prawns and a spicy sauce although I was tempted to go for the vegetarian option, even for a committed carnivore, I do like to go to the dark side occasionally and eat exclusively vegetarian but alas not this time. 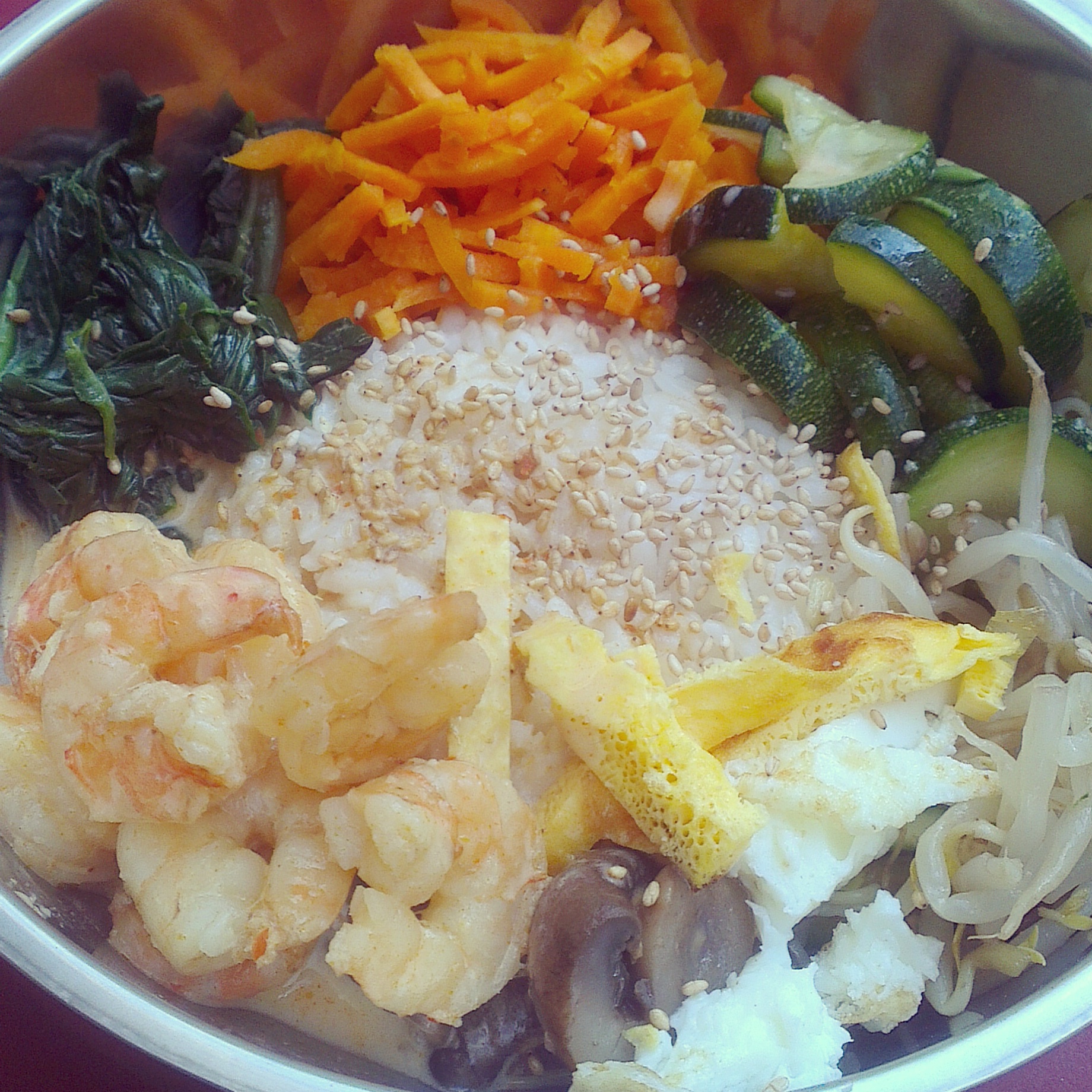 My dish came as pictured: lots of vegetables, rice and spicy sauce on the side. It was nice although I was disappointed because curried prawns and what I was presented with didn’t marry up and I was grateful for the spicy sauce as otherwise it was pretty bland. I really wanted to like it but having finished my very first bibimap I surmised that this was a Frenchified or, perhaps in clearer English, a bibimap made for French palates as the French do not do spicy. I like my flavours bold, punchy with a tingling aftertaste. I didn’t feel or have any aftertaste in actual fact. However, I am grateful to Jules and Shim as it means to hell with the tax man I am going to have to find another bibimap restaurant in Paris – hooray!

How? line 5 (stop Jean Bonsergeant) + 10 minutes walk or longer if you stop off in the MAJE sale shop or not…

Open when? 7 days a week for lunch and dinner during the week and then non-stop on the weekend. They offer a delivery service to certain arrondissements.