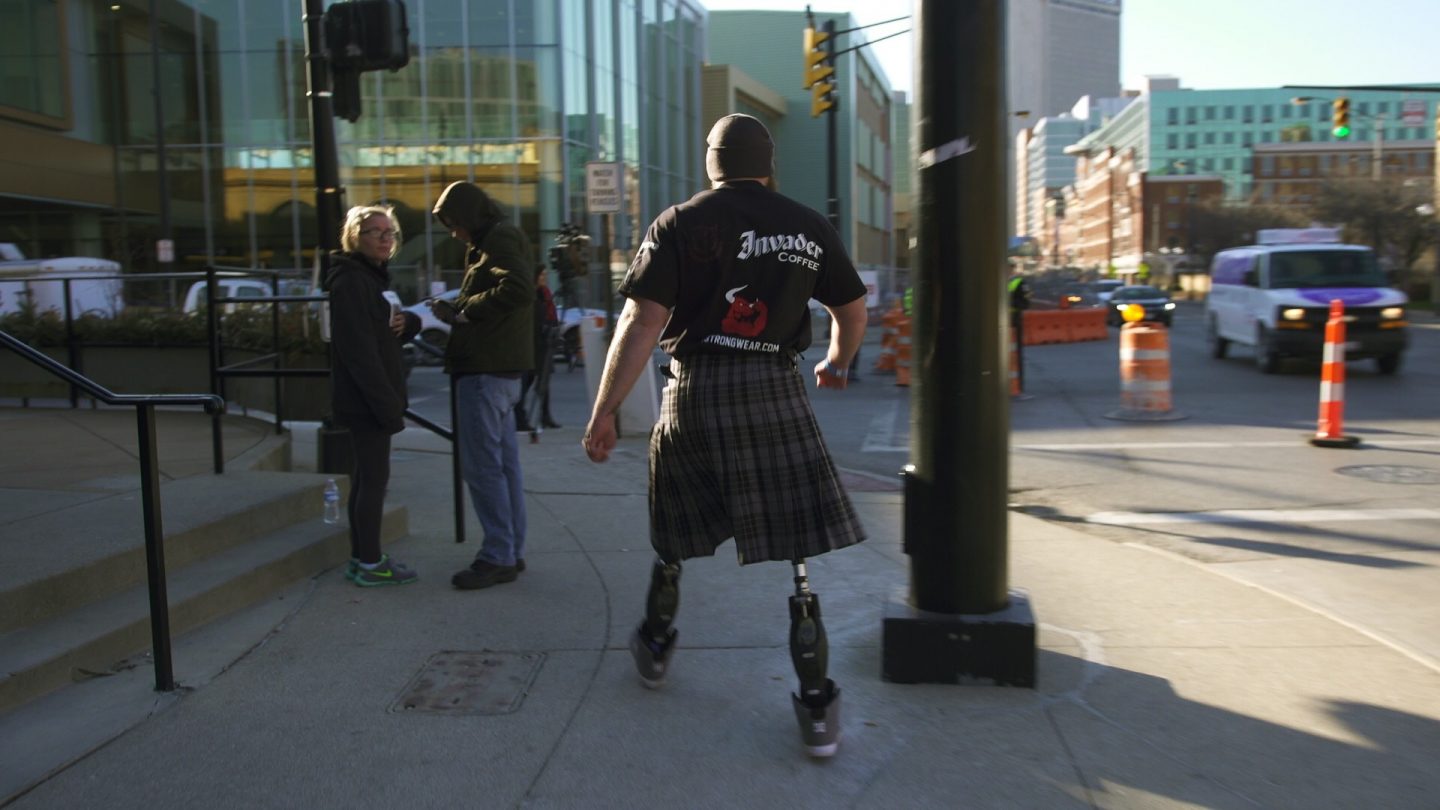 IED is an inspirational documentary that lives up to its full title: Improve Every Day without pulling any punches or romanticising the life of a wounded soldier. What it does do is leave the viewer humbled by Steven ‘Stevie’ Richardson’s determination and as a by product provide a thoughtful look at male vulnerability.

All documentaries and documentary makers seek to tell you a story from a particular viewpoint. Director and Producer, Ruaridh M.Turner’s view is clearly one of hope. This is an impressive debut because the pacing direction leaves the viewer with space to take in the enormity of what Stevie’s life is like without gimmicks. Careful editing has resulted in a documentary that feels like a film in so far as the viewer follows the highs and lows without being able to guess the outcome. We met Stevie training two months before he heads to America to compete in the strongman competition set up by none other than Arnold Schwarzenegger for disabled competitors.

What’s great about IED is that it’s not just a film about overcoming challenges and the unbreakable human spirit but also manages to shine a spotlight on male vulnerability and masculinity especially in Stevie’s case. He certainly isn’t where he thought he would be. At the age of 22, whilst on active service, he stepped on an IED and lost both his legs and disfigurement to his hands. There are so many poignant moments but it’s the words of the man himself that deliver the emotional gut punches none so more as when he says: “I never thought about being injured, I just figured I’d be dead”. What Ruaridh manages to do is never be too present. We are not being told how to experience Stevie’s journey, we are on the journey with him and also Kenny, a special forces veteran and Stevie’s trainer. Their trip to America provides much of the laughs in the documentary and watching Kenny try to keep Stevie’s spirits up show the importance of male friendship.

There are very few women which is something you only notice much later on after watching the film. It’s refreshing to see a film focus just on the male experience and be brave enough to tell that story. Nor, mercifully any overpowering music. The soundscape is either human voices or nature allowing the viewer space again to just experience the banal every day where we really appreciate how Stevie lives now. In a poignant scene he says he realised that he’d never again be able to run up the stairs. In another when Kenny kicks his son’s football into a field we are again reminded that it is the little things that compound how Stevie sees himself and how the world sees him. I was brought to tears when he fetched Kenny’s son football, not through pity but the sheer grit he showed.

The film was broadcast twice on BBC Scotland in August/September with a month of streaming on BBC iPlayer where it received high audience ratings, including 1.5 million views on the BBC Scotland trailer on Facebook. Hopefully, the BBC will run it again not least because the Nation will remember the great service and sacrifice of the Armed Forces on Remembrance Sunday but too because of the message that there is no such thing as impossible.

Perception is everything not only how Stevie sees himself but it prompts the viewer to reflect on how they perceive those who are severely disabled. Stevie’s not handicapped but a wounded veteran and we should and can be inspired by Stevie’s determination to improve every day. An IED is not just a weapon of destruction but the initials can be turned into something positive.

An inspirational, darkly funny and touching documentary about survival, hope and male vulnerability. A must watch which will leave you wanting to know more – the best type of documentary!

Now available to stream on Amazon Prime UK and USA.